Endorphina has been around since 2012, but it’s only in the last few years that it has become a major feature on mobile and desktop casinos. As players have grown hungrier for real money slot machines and the variety provided by different developers, brands like Endorphina have experienced rapid growth.

In 2019, Endorphina took a giant leap forward when all of its games were tested for fairness by GLI, guaranteeing that that they are 100% fair and safe. In addition, Endorphina has a license from the Malta Gaming Authority and this allows its games to be offered to players in major locations all over the world. 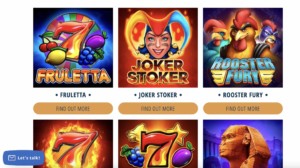 The innovation and hard work behind every single Endorphina slot puts them on equal footing to studios like Thunderkick, another brand that is making a name for itself in a saturated industry.

There tends to be more of a focus on retro slots than you’ll find with Thunderkick, but it still puts a lot of work into its games and ensures that all of them have a polished aesthetic.

The Endorphina gaming roster is far from the biggest one out there and it’s tiny when compared to the mighty Microgaming and other big brands. However, there are still some great games to explore, and if you’re not sure where to start, I recommend looking for the following:

What is the Best Endorphina Slot?

I prefer big graphics and unique features. I also have a thing for sports, so I would lean more toward slots like Cricket Heroes. However, there are many more great slots in the Endorphina roster, and if you prefer to keep things simply, you may be better off with games like Hell Hot 100.

When Was Endorphina Founded?

Endorphina launched back in 2012. As a result, it's still a relatively new brand when compared to the likes of Playtech, but it has had plenty of time to improve, grow, and become a promising creator.

You can play all Endorphina games on mobile. They work on both iOS and Android.

Start spinning those retro reels today by joining one of the Endorphina casinos on this page. Scroll up, take a look at the many great sites and bonuses, and sign up! Once you have a fully-funded account, you can start searching through those games rooms to find their selection of Endorphina titles.