Games.Bitcoin is an online crypto casino that intrigued me right from the off. Upon realising that it was owned and run bit Bitcoin.com, I was very interested, and my interest piqued when I realised that it was the sister site of BitspinCasino, which is run by DAMA.

the sister site of BitspinCasino, which is run by DAMA.

It is based in Costa Rica and doesn’t have any traditional gaming licenses, but it’s a respected, trusted brand run by one of the biggest names in cryptocurrencies.

In the following Games.Bitcoin.com review, I’ll discuss the reasons what makes this site unique.

Games.Bitcoin is based in Costa Rica.

Costa Rica doesn’t offer gambling licenses, so it works a little differently from the likes of the Malta Gaming Authority and the Curacao eGaming Commission in that respect.

There are hundreds of online casinos and sportsbooks based here and many of them claim to operate under a Costa Rican license, but no such thing exists.

Games.Bitcoin is more honest about things, merely stating that it is based in Costa Rica and operates under its laws and regulations, which is true.

It’s also worth noting that while Costa Rica doesn’t have the same iGaming infrastructure as Curacao, it does still require licensed companies to pass a number of checks. They must also acquire a data processing license, and this helps to protect the security of all customers/players.

So, what are the benefits of basing a casino here? After all, we know that Bitcoin.com also lends its name to BitSpinCasino, which is actually licensed in Curacao. So, it’s clear that it can acquire licenses and indeed already has them on another casino.

The only thing I can think of is that it gives the Bitcoin.com team access to new markets, including those that otherwise wouldn’t have access to crypto gambling. It also gives it a little more freedom with regard to bonuses, player verification, and banking options.

This is one of the main reasons Games.Bitcoin only requires the most basic details during sign up. It’s also why the site doesn’t seem to have a deposit or withdrawal limit.

Games.Bitcoin has a very modest selection of slots and table games from developers like NetEnt, Evolution Gaming, BGaming, Amatic, Ezugi, Vivo Gaming, Playson, Wazdan, Endorphina, and a few others. It’s far from the likes of MELbet, where you can find thousands of slots. But all of them are Bitcoin-friendly and in addition to lots of slots, there is also several Live Casino games.

Jackpots are plentiful here and Games.Bitcoin includes games with features such as Hold and Win and Megaways, among others.

You can even find a few games that are exclusive to Games.Bitcoin, though as this is an unlicensed brand, it’s worth noting that the games may not have gone through the same rigorous testing and auditing as other developers.

It should also be noted that while some players have complained about rigged games (these comments are not unique to Games.Bitcoin and can be found in the negative reviews of most casinos), that’s simply not possible. Most of the games are third-party, and the providers that create them and host them are legitimate and certified as fair.

Games.Bitcoin offers its new players the choice between two different cashback bonuses. These Welcome Promotions give you either 15% or 25% on all slots that you play during your first 14 days on the site.

It’s one of the better Welcome Bonuses out there. It might not seem like it at first, and most players are more likely to be tempted by a 1 BTC Matched Deposit Bonus. But in most cases, you’ll collect that 1 BTC, lose all of it, and then say goodbye to your deposit as well. At least with this bonus you’ll have funds left at the end of that 2-week period.

To get the 15% Welcome Bonus, you must deposit at least $50. It’s larger than the average minimum deposit, but it should be more than accessible for most cryptocurrency players. To get a shot at the higher bonus, you’ll need at least $2,000.

These two Welcome Bonuses are just some of the offers you will find at Games.Bitcoin.

Reload bonuses aren’t too common, but there are stacks of tournaments, cash drops, and more. Most of these promotions are network offers, which means they are provided by iGaming developers and not the casino. Still, they are huge and there are plenty of them to go around.

Games.Bitcoin also has a VIP Program. It’s a true VIP Program, which means it’s only offered to the site’s biggest and most active players. It also offers a wealth of rewards and perks, including your very own personal VIP account manager, exclusive promotions, 24/7 dedicated customer support, customised rewards, reload bonuses, special gifts, and access to unique games.

One of the most interesting aspects of this program is the exclusive games. These aren’t just new games that you get to play before everyone else. They are games made for high rollers, ones that have much higher bet limits. If you find yourself frustrated by bet limits on traditional slot machines, these games could be just what you’re looking for. 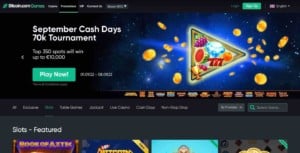 Games.Bitcoin keeps things very simple when it comes to payment methods. You can transfer funds to your account using Bitcoin and Bitcoin Cash. Visa and Mastercard symbols are also listed in the website’s footer, but payments seem to be focused 100% on Bitcoin.

Bitcoin withdrawals are processed in a matter of seconds, so there is no prolonged wait to get your funds. Previous deposits must be confirmed at least twice on the blockchain.

The only real issue with this process is that there’s a fee of 0.0001 BTC, which is about $2 at the time of writing. It’s small, but it’s a fee nonetheless, and it bugs me whenever online casinos and sportsbooks do this. The vast majority of sites out there don’t charge fees, so if you do, you’re going to stand out for all the wrong reasons. It’s not as bad as some of the others that I have seen, but it’s still a fee.

Combined with the minimum deposit of $50 for the Welcome Bonus, this is another reason why Games.Bitcoin just won’t appear to casual players. After all, it’s a fixed fee and not a percentage, so it remains the same whether you’re withdrawing $100 or $10,000.

Can I Use Traditional Payment Options at Games.Bitcoin?

Games.Bitcoin is a cryptocurrency casino first and foremost. You can deposit and withdraw using Bitcoin and Bitcoin Cash but bear in mind that you will be charged a fee when making a withdrawal. It's very small, though, and shouldn't bother most players.

Yes, most games are provided by trusted and provably fair developers like NetEnt, so you can be sure that the RNGs are fully certified and every outcome is completely random.

No, although it’s not licensed by the typical iGaming regulators, it’s not a scam. After all, we're talking about a site that has the backing of one of the biggest companies in the crypto sector, as well as one that works with secure and fair game providers.

The site is owned by SBGC S.R. and connected to Bitcoin.com. It also runs a sister site that actually is licensed and operated by Dama, one of the biggest brands in the cryptocurrency gambling sector. All signs are good.

Does Games.Bitcoin Have a Loyalty Program?

Yes, Games.Bitcoin has a VIP program that offers huge rewards and perks to the biggest high rollers and the most active players. You’ll get a wealth of perks and these increase along with your deposits and wagers.

No, the casino does not operate using a traditional iGaming license. It is registered under the laws of Costa Rica which doesn’t have such a system in place but is popular with casinos that try to target US players. If you’re looking for another crypto casino, check out the brilliant King Billy Casino 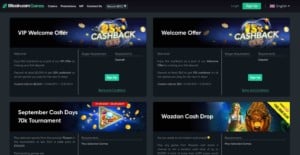 There’s a lot that I like about this site, including its crypto-friendly games. I also like the fact that it’s connected to Bitcoin.com, and considering the names involved, you know you’re getting a safe, secure, and fair gambling experience.

The games room is not the biggest, but it doesn’t really need to be. There has been a trend toward huge games rooms in recent years and while I like to see large selections, there’s a limit to what’s actually necessary.

Games.Bitcoin hits the sweet spot in that regard. It’s enough that I can browse for many minutes and still come across new games. It’s also enough that I can find multiple options for features like Progressive Jackpots, Megaways, and Cascading Wins. But it’s not so much that I feel I need a gaming PC just to load the full list of thumbnails.

All things considered, Games.Bitcoin has a lot to offer and I’d definitely recommend signing up if you’re looking for a new BTC-friendly online casino.

If you’re looking for more top reviews, there are hundreds for you to peruse including PokerStars Casino and the behemoth that is bet365 Sportsbook and Casino. You can also take a peek at our top list, where you will find countless casinos, sportsbooks, and poker sites, the vast majority of which accept cryptocurrencies like Bitcoin, Litecoin, and Dogecoin.