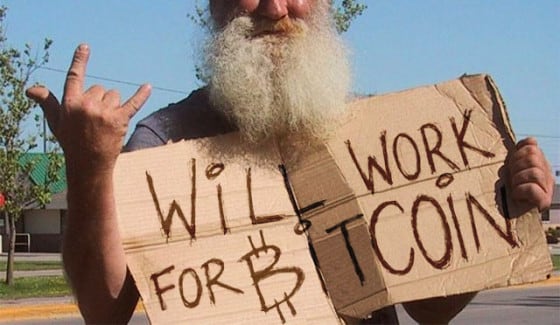 We have never had a day without a new subscriber, which is genuinely really great news.

Matthew Boyd is a 17 year old Bitcoiner who has been involved with numerous Bitcoin projects, most notable of which being /r/Jobs4Bitcoins – a subreddit which acts as a job board for the Bitcoin community.

We interviewed him on his subreddit and his Bitcoin career. Here’s what he had to say.

Let’s start at the beginning: how were you first introduced to Bitcoin?
I first got involved in Bitcoin when I was 15. I was introduced by an incredibly tech-savvy friend that was telling about a payment system that he was working with. He tried to explain them, but because I was more interested in playing games at the time, I took no notice. Perhaps a month or so later, he was still working on a project, and had mentioned them again, so I decided that I’d do a bit of reading around the subject to see what it was about. I then started get friendly with the Bitcoin community, mainly through Reddit.

What were you hoping to achieve when starting /r/Jobs4Bitcoins?
/r/Jobs4Bitcoins was an idea that I had when I was trying to think of ways to gain Bitcoins. It was hard for a 15 year old to get Bitcoins for two reasons:

I wanted to purchase them with my debit card, but all companies wanted credit cards, which I wasn’t eligible to have due to my age. By this stage I hadn’t heard of LocalBitcoins, but I highly doubt that my parents would have let me go and meet a stranger and exchange real money for “virtual” money. So I thought that perhaps my typing skills / speed would be able to come in handy, and perhaps I could work for Bitcoins as a method of obtaining them. At the same time, I was studying Economics and was shown the depressing statistics about the overwhelming amount of youth unemployment around the world, mainly in countries such as Spain, Ireland, as well as in my home country of Northern Ireland. You could see it within society. You heard about the stories of the many drop-outs that were living on the “dole” (Job Seekers Allowance) and abusing this benefit. I became passionate about this, as I’ve always wanted to work from a young age, and be able to earn money, and support myself.

Do you feel that /r/Jobs4Bitcoins has succeeded in achieving what it was created to do yet?
/r/Jobs4Bitcoins acts as a gateway to allow youths, with all of their technological skills (whether that be typing at a fast rate, or programming at higher levels than perhaps some adults within the computer industry) a chance to get a taste of employment. It also allows them to write on any “personal statements” or “Curriculum Vitae” that they had previous experience. Increasingly jobs are asking for experience, as I have found out first hand at the age of 17. This makes it very hard for people to concentrate on their studies at the same time as working to build up experience. It’s a vicious cycle: employers always ask for experience to work for them, but no one will let you work for them without experience, so how do you get a job? Jobs4Bitcoins generally doesn’t require you to have qualifications unless specified by the employer, rather it lets your skills do the talking, which ultimately is how I believe it should be. Many people get turned away from job interviews purely due to the fact that they don’t meet the entry requirements. However, qualifications aren’t everything: many of the people that they may turn down will be very good practically, and would be 100% suited for that position, but due to not being incredibly academic they haven’t the ability to show off their talents, and are rejected. In short: yes, I believe it has.

What do you think is currently lacking from /r/Jobs4Bitcoins?
Currently, there are a few things that are lacking from /r/Jobs4Bitcoins. The first, and most predominant issue is one of the underlying features of Bitcoin: facelessness. This allows for scammers to easy arise if due dilligence is not practiced. Currently we are looking at trying to resolve this situation, but in the mean time we just try to warn all of our users to take care when handling transactions. Secondly, it seems that it is hard for /r/Jobs4Bitcoins to branch out into the real world so to speak. There are many programming jobs, graphic design jobs, networking jobs, etc., but there are very little trade jobs such as local electrician, or plumber. This is something that I’d love to change, as it would not only help vocational students become employed, but it would also increase the distribution and knowledge of Bitcoins, so it’s a positive sum game.

How do you see /r/Jobs4Bitcoins progressing over the next few months/years?
Honestly, I can only see Jobs4Bitcoins growing futher and futher. This will obviously be fueled by the rise of Bitcoin. An impressive statistic about /r/Jobs4Bitcoins is that we have never had a day without a new subscriber, which is genuinely really great news, and shows the traction that it is gaining.

You were relatively young when you started your Bitcoin career. Do you feel that your age has ever been a barrier to success for you?
I don’t think that age has hindered me in any way. If anything, it has been a complete advantage. I feel like I’ve learned a lot of skills from entering into Bitcoin. I’ve had many opportunities to talk to some very amazing people, as well as holding escrows of ridiculous amounts of money; accolades that many won’t ever achieve in life. Due to the majority of Bitcoiners being a lot older than me, it motivated me to get to a standard of proper English and knowledge sufficient to effectively communicate with them. Additionally, through working for people in Bitcoin, it allowed me to buy a car at the age of 17 which I feel is an impressive achievement in itself!

Finally, is there anything you’d like to say to any other young people in the Bitcoin space?
Age will not be a boundary – especially when it comes to Bitcoin. Remember that it’s faceless and that means that it can also be an advantage: no one needs to know your age. Additionally, I would say to stay in the Bitcoin game, even if that means just checking up on news every now and again. You never know, you may find a particular sector that interests you and like me get completely hooked, and earn money for what you’re passionate about!

Interviews Uncategorized
State of Bitcoin in Hong Kong: President of the BAHK
6 years ago
109