You will see the Red Tiger Gaming name and logo on some of the best online casinos in the United Kingdom, Canada, Australia, and other major gambling markets.

It’s not big enough to be considered one of the industry’s biggest names and is not quite in league with Playtech and other big brands, but it’s a massive fringe creator and one that has some promising slots in its roster.

At the top of this page, you will find a variety of online casinos that host Red Tiger Gaming slots. These casinos have a number of Welcome Bonuses and Loyalty Bonuses for you to explore, as well as payment methods and other gaming creators.

There are a multitude of casino themes and availability in regions all over the world, but the thing that they have in common is that they all have Red Tiger Gaming slots.

To learn more about these sites, just click the links above. To discover what makes Red Tiger Gaming such a sought-after creator, keep reading.

What is Red Tiger Gaming?

Red Tiger Gaming launched in 2014 and was backed by a group of experienced creators, gamers, and industry professionals. The “for slot fans by slot fans” idea is not exactly new and it’s something you will see in the About Us pages of many top creators, including the Playtech-owned Quickspin. But it’s still good to see as it suggests that they know what they are doing and understand what customers are looking for.

With licenses from the authorities of Alderney, the United Kingdom, Gibraltar, and Malta, Red Tiger Gaming is able to offer its games to casinos all over the world and can target a huge number of players.

Red Tiger Gaming is not one of the biggest developers and it pales in comparison to creators like Microgaming. As a result, it’s never the main developer on an online casino, and that’s a good thing.

It means that you will always find a huge selection of games alongside those created by Red Tiger Gaming.

We have listed some of our personal favourite Red Tiger Gaming online casinos on this guide.

Red Tiger Gaming creates games that players want to play. It sounds like a redundant statement, but what we mean is that it uses popular features and mechanics and it partners with other developers to create standout titles.

Take Gonzo’s Quest Megaways as an example. It is one of the most famous slots in the industry and was actually NetEnt’s first platinum game. You can find it everywhere and most players like it. We include ourselves in that list as well, even though Gonzo’s Quest has never been kind to us.

In Gonzo’s Quest Megaways, Red Tiger Gaming has taken this massively popular game and combined it with the Megaways mechanic from Big Time Gaming. Again, it’s a mechanic that players absolutely adore, and when you consider that it can add over 100,000 paylines to a single spin, it’s easy to see why.

It’s not uncommon for iGaming developers to license gaming mechanics, and Megaways is a great example of that. But it’s very common for them to license entire games and gaining franchises to other creators, so what’s happening with Red Tiger Gaming and NetEnt?

In 2020, both NetEnt and Red Tiger Gaming were actually acquired by Evolution Gaming, a massive brand that made its name in the Live Casino sector.

Evolution Gaming has been on the ascent over the last few years and is quickly becoming one of the biggest brands in the industry. The acquisition of Red Tiger Gaming and NetEnt has played a major role in that journey and it has also allowed them to blend different ideas, themes, and licenses.

With so many great games to explore, it’s hard to highlight the best Red Tiger Gaming slots. However, we have played most of these games before and it’s fair to say that we like some of them more than others. So, to give you an idea of what to expect from this developer and to help you get started with the Red Tiger Gaming roster, take a look at this selection of slots.

Gonzo’s Quest Megaways isn’t the only collaboration between NetEnt and Red Tiger Gaming, as Piggy Riches comes from the same mould.

They have taken the classic NetEnt slot and added the BTG Megaways mechanic, delivering up to 117,649 paylines in the process. It is possible to win as much as 10,000x playing this slot machine, which is themed around a couple of rich pigs known as Lady Pig and Gentleman Pig.

Megaways expands the reels to create a 6×7 grid but everything else that comes from the first game remains the same, including the stylish graphics, the luxury style, and the big wins.

Celebrate the harvest with this beer-themed slot game! It takes place in the famous Munich festival and includes all of the symbols you would expect to find, including massive beer tents and equally massive tankards.

Lucky Oktoberfest is not the first slot game to be based on Oktoberfest, but it’s definitely one of the best ones out there. It looks great on mobile so you even take it with you to the titular festival and play it as you enjoy a few pints (or gallons) of German beer.

Something about train heists seems to resonate with iGaming developers as there is no shortage of slots that follow this theme. The Greatest Train Robbery is probably not the best one that uses this theme, but it’s certainly up there.

It was released in the summer of 2019 and features a 5×4 grid with a big maximum win of 2,000x. There are 40 paylines in total and the reels adopt a very comical aesthetic, with the bandits coming across as a little more hapless than you will see on other heist-themed slots.

Rocket Man was released at the hight of Trump’s presidency and is based on his relationship with North Korea. It’s bizarre and it’s fun—it’s just a shame we weren’t having as much fun when the world was threatened with nuclear war.

There are two sides: Donald Trump and Kim Jong Un. They are at war throughout the slot and there are numerous features. In one of them, Trump plays golf and fires wilds across the reels. In another, Kim Jong Un shoots rockets across the screen.

It’s perfectly embodies everything we love about online slots—loads of features, great graphics, and an incredibly fun theme.

On the surface, Rocket Man doesn’t look like much. It has a simple 5×3 setup, a limited 20 paylines, and a low 624x maximum win.

But the features and the gameplay are what make this game unique. You can also play it on both mobile and desktop.

Lucky Halloween is one of the most commonly played and advertised slots during Halloween, and not without reason.

It revolves around a motorbike rider with a pumpkin for a head. It adopts a dark and a cosy aesthetic and has lots of fantasy elements. The features include big wilds, colossal symbols, special reels, and more.

Lucky Halloween has been around since 2016. It adopts a 5×3 grid and has 20 paylines, with the maximum payout fixed at 800x.

Snow Wild and the 7 Features

Snow Wild and the 7 Features is a fairy tale slot game that combines a fun theme and gameplay with a huge 7 features. It has 5 reels, 3 rows, 20 paylines, and a maximum single spin win of 2,000. The volatility is very high and the features include a host of wilds, big symbols, Free Spins, and more.

If you like your slots to be as busy as possible, filled with a host of features and a great aesthetic, make sure you add Snow Wild and the 7 Features to your “to-play” list.

Three Musketeers is an action-packed slot game that features 5 reels, 40 paylines, and delivers a maximum win of 1,900x. All of the titular Three Musketeers feature in this slot and there are lots of wilds, respins, and Free Spins.

Dragon’s Luck is one of Red Tiger Gaming’s most popular online slots and Dragon’s Luck Deluxe is the fully updated version, keeping everything that makes the original so fun and adding lots more. It’s a simple slot with lots of opportunities to win and a maximum payout that is capped at a little under 4,000x.

The volatility is high, there are 5 reels, and you can unlock big wilds, huge jackpots, and an impressive Free Spins feature. The Mystery Dragon Coins, which made the first Dragon’s Luck slot so popular, also make an appearance in Dragon’s Luck.

If you have yet to play this slot, now is a good time to start.

They are very secure and they are backed by some of the strictest regulators in the iGaming industry, including the United Kingdom and Sweden. It means that all of the games are 100% fair and every transaction is safe.

Where Can I Find Red Tiger Gaming?

You can find Red Tiger Gaming titles at all of the online casinos on this page. Just sign up, collect your Welcome Bonus, and visit the games room. Most online casinos have filter options to allow you to sort by provider.

Which is the Best Red Tiger Gaming Casino?

There are so many great casinos to choose from and it really all comes down to your personal preference! However, we're huge fans of King Billy. Not only does it have several great developers but it also has an impressive Loyalty Scheme. MELbet is also a Red Tiger Gaming casino and one of the things that makes it special is that it also has many other developers in its games room.

Can I Play Red Tiger Gaming Games with Bitcoin?

As long as you stick with a BTC-friendly casino, such as the ones included in this guide, you should be able to play Red Tiger Gaming games using cryptocurrencies.

Is Red Tiger Gaming Available in the United Kingdom?

Red Tiger Gaming's license from the UK Gambling Commission allows it to operate legally and safely in the United Kingdom.

Are you ready to start spinning some Red Tiger Gaming slots and see what all the fuss is about? Scroll to the top of this page, choose one of the casinos, and sign up. Just remember to collect the Welcome Bonus and make sure you read and understand the Terms and Conditions. 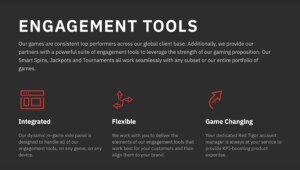 For information on other top developers, take a look at our guide to Thunderkick, a mobile-friendly developer that explores similar themes and features to Red Tiger Gaming.

That’s not all, either, as we have hundreds of guides on other creators, along with every possible payment option and bitcoin-friendly casino.

Take a look around and see what you can discover.