by Coinbuzz
Last Edited: 1 month ago 210

Time to get technical! This weekend did not have as much volatility as I expected but the trading environment was bearish as expected since price resistance held around $240. Without any overt positive indicators, though there has been some short-term stability that lingered over the weekend, it would seem that bullish traders are still trying to push the market upwards. That said, we are moving into bear territory and it may be a rough time over the next few days. Let’s start with with the 1 hour mark and take a look at what happened over the weekend: 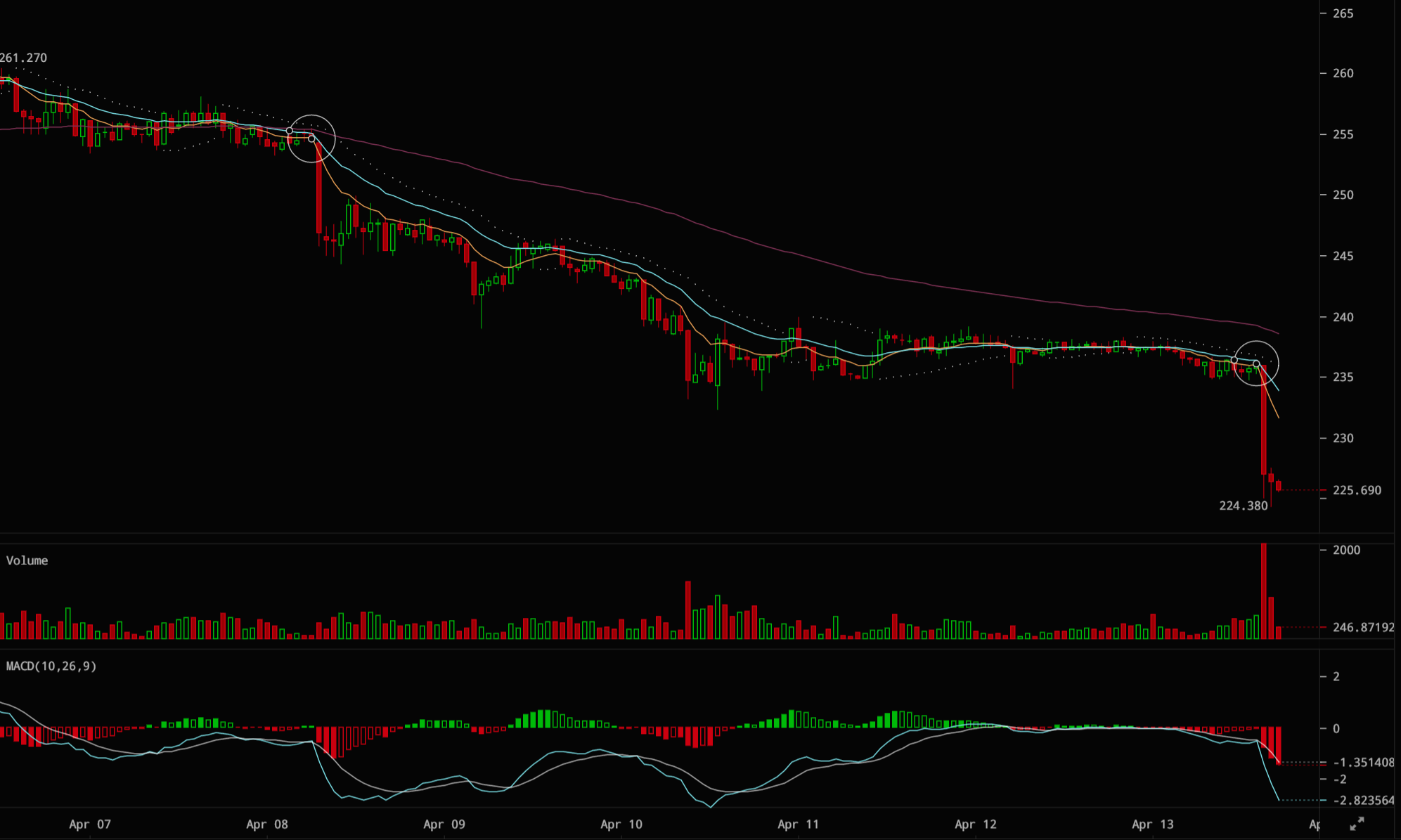 From this more macroscopic level, we have only got one major area from the middle of last week and unfortunately it’s a negative price inflection point. Around 04/08 we had a pretty significant price drop off from $255 to $246 and this narrative is where the major negative trend began that has continued since. Fortunately the drop off only continued until 04/10 and the stability has held with some sturdy price resistance over the weekend. However, this stability is going to be short-lived and to support this we can take a look at the 3 minute chart and I will warn you ahead of time, it will involve some red: 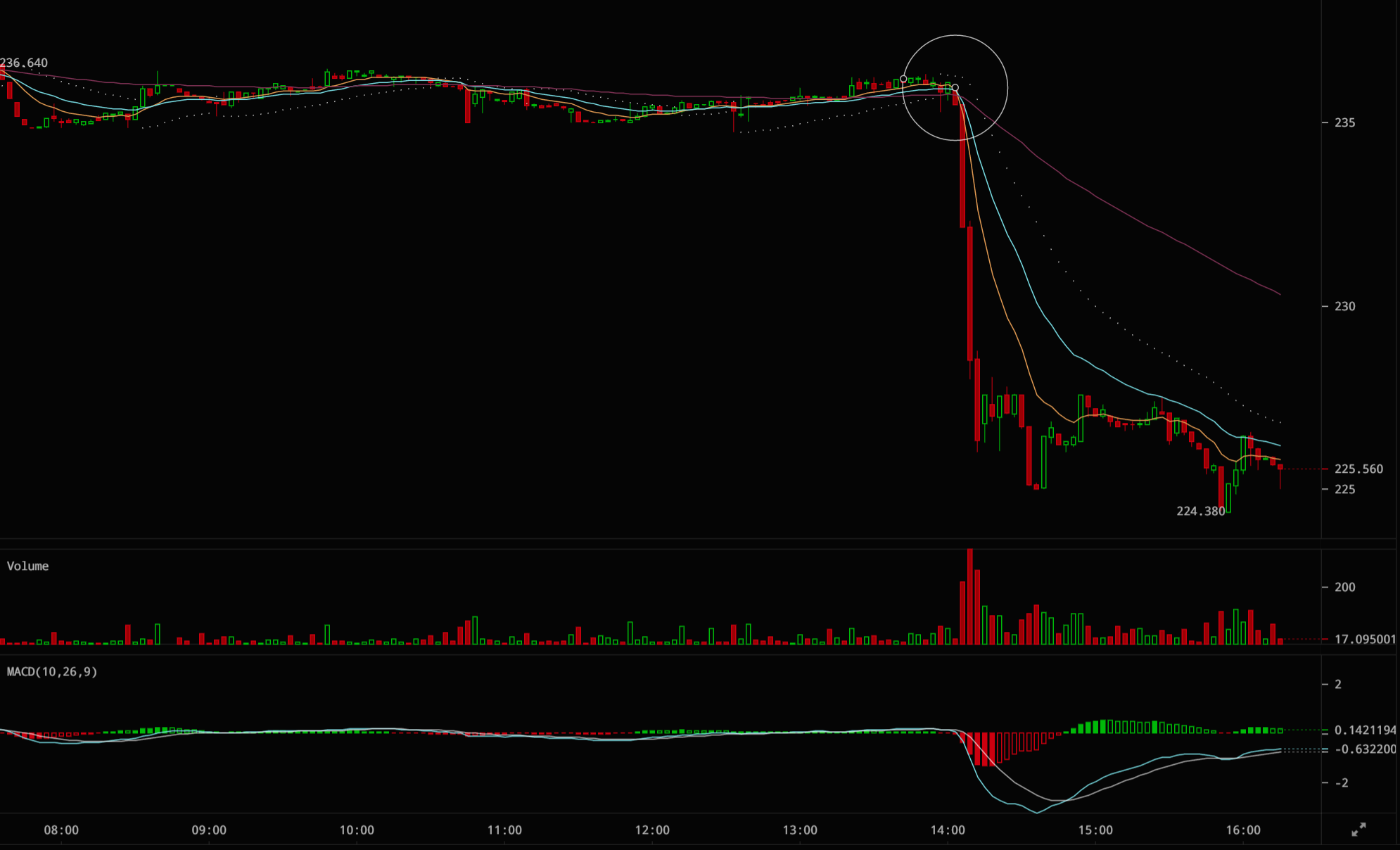 Chronicles of Narnia and stock tickers

I have been reading some C.S. Lewis recently and I thought he put it well with:

“Perhaps your own reiterated cries deafen you to the voice you hoped to hear.”

So here we have the most recent price drop from $236 to $226 and unfortunately we have another $10 drop on top of what the market suffered last week. I mention Lewis here not just to interject my reading habits but also to illustrate a point: we need to get past our own price aspirations and concerns so that we can make informed decisions, regardless of whatever your personal trading philosophies may be. Bullish action right now is holding at $220 but this cannot be sustained indefinitely and we are on a downward trend.

It is not all bad news and there may be some positive motion to assist with any short trades and it was something new in my own research. It is called a falling-wedge and herein is some possible good news:

“The Falling Wedge is a bullish pattern that begins wide at the top and contracts as prices move lower. This price action forms a cone that slopes down as the reaction highs and reaction lows converge. In contrast to symmetrical triangles, which have no definitive slope and no bias, falling wedges definitely slope down and have a bullish bias. However, this bullish bias cannot be realized until a resistance breakout.”

So we have got an environment where a falling-wedge is an indicator of bullish action and can herald some upward action if and only if price resistance is broken through. Here’s the technical: 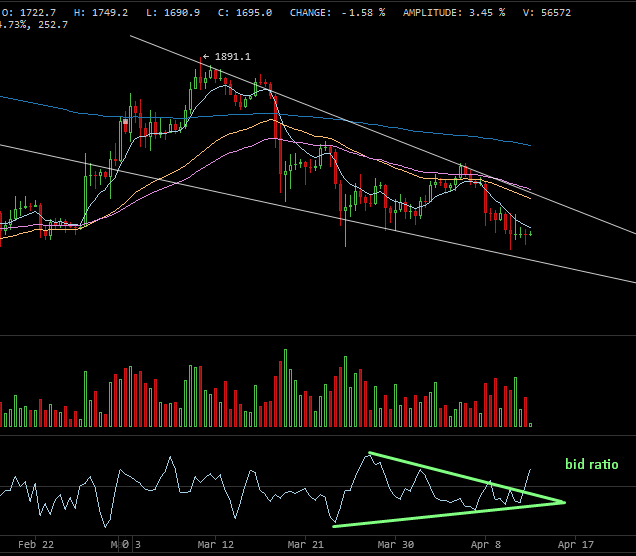 Let’s do some comparison: the 3 minute technical showed us a solid price drop and marked increase in sell volume but the 12 hour falling-wedge. Both of these technicals display the same story, there is significant downward momentum with potential for a price resistance breakout. I think we may see a price rally up to near the $230 level, possibly even to $240 again, but that will be the price ceiling; there will be strong resistance at the $240 level. Currently I remain neutral on any trading recommendations right now other than what I have said in other forecasts, keep vigilant and now is a good time to acquire before the any price rebounds. Happy trading!

Bitcoin Investments
Will Other Companies Follow Tesla’s Lead and Spend Big on Bitcoins?
8 months ago
316