A Hardware Wallet for Your Digital Currency

by Coinbuzz
Last Edited: 1 month ago 309

Safely storing your hard-earned bitcoin is still a major issue for newbies and cryptocurrency veterans. Blockchain Technologies Inc.(BTI), a Canadian company that focuses on blockchain-based solutions, has released a hardware wallet storage solution that works with several types of digital currencies. The hardware wallet is called Staker, and supports Proof-of-Work digital currencies such as Bitcoin, and also Proof-of-Stake cryptocurrencies such as Peercoin. Staker has been in development for the last few months, and is aimed at users who wish to remove the risks associated with traditional storage media such as hard drives.

Consumers have the option of ordering the Staker hardware in a pre-assembled form, or as a custom made solution. The Staker wallet sports an Ethernet port that provides Internet connectivity, and several USB ports that allow for peripheral such as a mouse to be connected. The wallet also has an HDMI port, which can be used to connect a monitor. 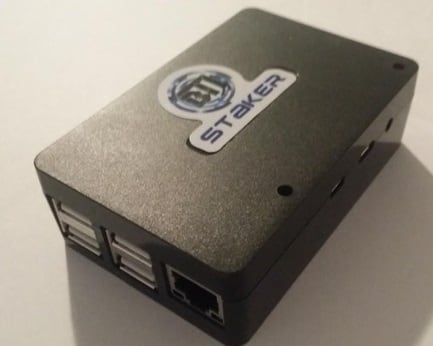 Proof-of-Stake(POS) cryptocurrencies require miners to keep their wallets open, in order to receive interested payments and to mine coins. The Staker hardware wallet allows miners to have a 24/7 running POS wallet, which consumes much less power than a normal PC would eat-up if it ran 24/7.

The Staker wallet has most of the standard functions that come with a traditional bitcoin software wallet (e.g. connection, block height, balances, transaction history). The developer team behind Staker has big plans for the future, allowing Staker to execute trades directly on cryptocurrency exchanges that offer API access.

There are several other hardware wallet manufacturers, but Staker is the only one that provides support for different types of digital currencies in one device.