Purse.io, the peer-to-peer marketplace that allows users to exchange their Bitcoins for Amazon products and vice-versa, has partnered with ShapeShift in order to allow its users to use other crypto currencies aside from Bitcoins. 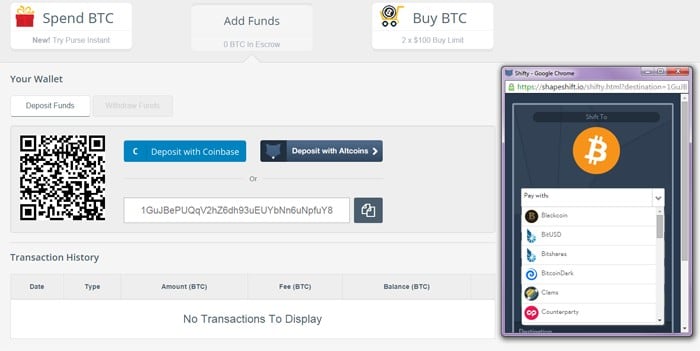 This is made possible through the simple implementation of the “Shifty” button (seen above), which allows users to instantly convert their alt-coins to BTC as long as they’re supported by ShapeShift. At the time of this writing, the list of supported alts is as follows: Blackcoin, BitUSD, Bitshares, BitcoinDark, Clams, Counterparty, Dash, Digibyte, Dogecoin, Feathercoin, Litecoin, Mintcoin, Monero, Namecoin, Nubits, Nxt, Novacoin, Potcoin, Peercoin, Quark, Reddcoin, Ripple, Shadowcash, Startcoin, Tether, Unobtanium and Vericoin.

Purse.io CEO Andrew Lee had this to say about the partnership:

“We’re excited to partner with Shapeshift.io to deliver huge savings on Amazon.com for not just the bitcoin community, but altcoin community as well, …”

“Since the day we started, we received requests to integrate altcoins. It always seemed like a lot of squeeze for the juice. Plus, we weren’t looking forward to having to keep up with the latest altcoin of the month.Shapeshift solves these problems beautifully. Thanks /u/evoorhees and team for making the integration super simple! By far the easiest partnership we’ve done to date.”

*evoorhees is the reddit username of Erik Voorhees, CEO of ShapeShift.

Also from ShapeShift’s Head of Marketing:

“I personally use Purse to buy things at Amazon frequently, now Bitcoin holders are not the only ones who can get the 10-20% savings. Anyone who owns Ripple, Counterparty, BitShares, and many other innovative digital assets can now effectively spend them at Amazon and save a considerable amount off retail price.”

Some users have questioned the move, citing doubts about the usefulness of alt-coins, to which Vorhees responded the following:

“I used to share that sentiment, but over time I realized that different digital assets could in fact possess fundamentally different attributes, and can often be used in tandem with bitcoin in important ways. For example, use Dash + Bitcoin for more privacy, or use Tether + Bitcoin for more stability. Hell, even Dogecoin + Bitcoin for more fun. Also, some digital assets aren’t really intended as a “currency” (BitShares or Storj for example). But to the extent people own them, why not enable them to be immediately convertible into goods on Amazon?

Coins that do nothing unique will likely fall to zero and be forgotten. Most altcoins fit into this category. But those that have unique attributes are worth consideration and will find uses. And for all the digital assets that exist and are in use, they ought to be immediately liquid/convertable between each other. Thus ShapeShift.”

Bitcoin Investments
Will Other Companies Follow Tesla’s Lead and Spend Big on Bitcoins?
2 years ago
1140