Bitcoin Price Charges with the Bulls

Rally, rally, and more rally! Bitcoin price has increased over $20 since our last market report and those predictions were way off, market order volume and support bands are pushing higher and higher. I would like to start with a quote from the athlete Don Kardong:

“Cheer for your teammates, regardless of whether they’re fast or slow, veteran or neophyte, varsity or JV. Or rally the spirits of someone who’s had a bad performance. Also, encourage stragglers during tough workouts; jog back to ‘pick up’ a runner who’s behind during a long run.”

In this we all cheer for each other regardless of how we might trade, with bullish speed or bearish gravity, everyone can benefit from such a massive market rally. The rally has even brought up some of the altcoin stragglers (I have a small amount of litecoin and now it has almost doubled for what I acquired it for!), though something like this usually happens when bitcoin rallies. Anyway, I am pleased that my more conservative projections from last time were on the low side and price has increased as much as it has. Small favors but I was able to keep my market and trading losses relatively small since I consolidated my cash positions into bitcoin with the intention of low price acquirement. Honestly I am not sure where this buying frenzy came from but it could be the situation in Greece, massive short trade coverage, or hopefully real institutional demand. Let it be known: this price level is the most significant technical resistance point in months.

After a brief pause at $250 yesterday the market buy volume slowed somewhat overnight (from an isolated high of $254) and has stabilized around $251. Let us take a look at the 1 hour mark: 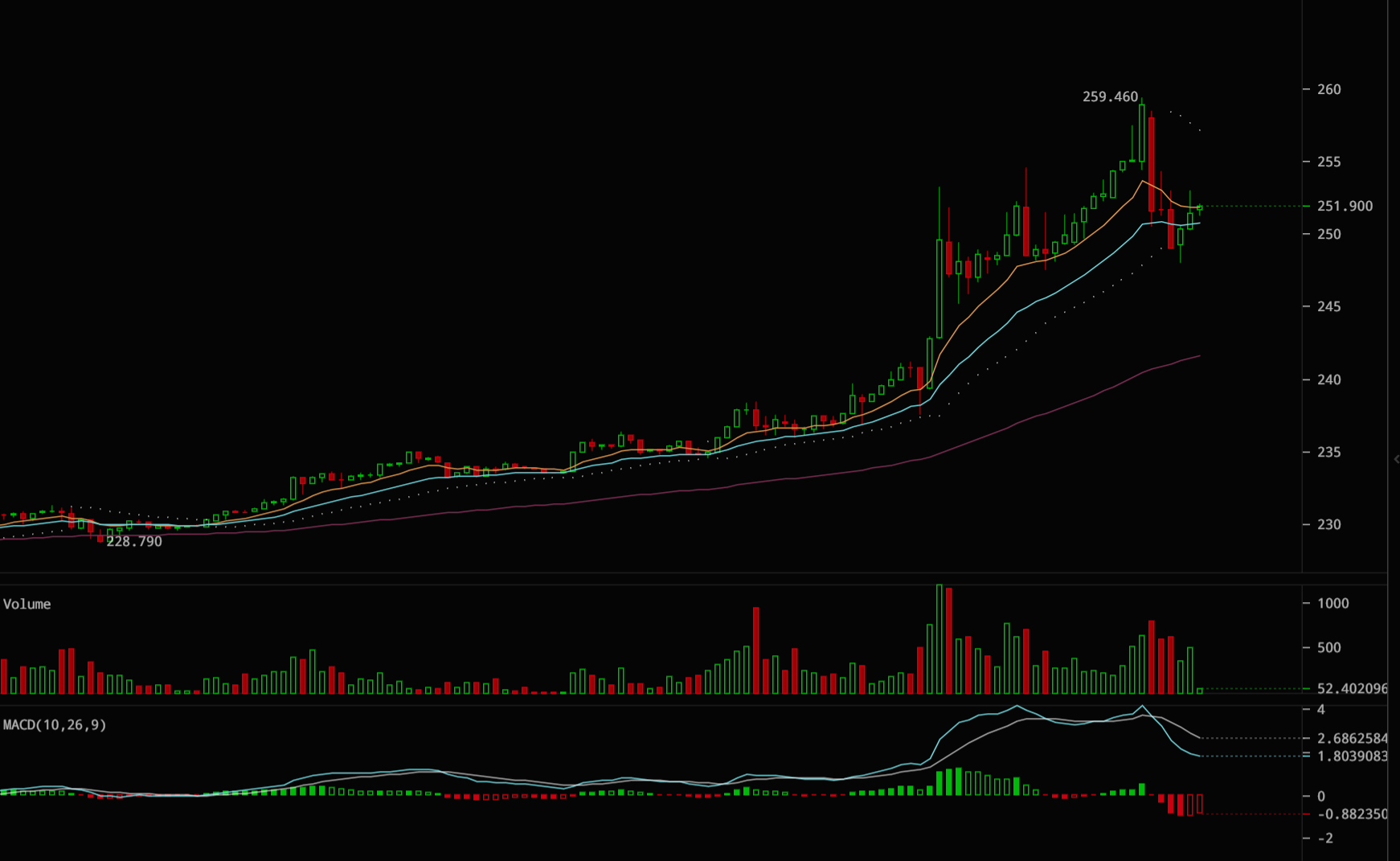 As mentioned in previous analyses, the bear market exit consolidation would not happen until price reached $260 with solid volume and hold patterns; the final mark would be price closure near $300 and then all can herald the end of winter. Sadly I do not want to make this call yet, despite the exceedingly positive market indicators, but it is that much closer even though the technicals are highly overbought in the short and medium term. Anyway, at the 1 hour there is not much to talk about technically other than the strongly positive upward slope and significant buy orders that have filtered in over the last day or so.

As of now I would recommend some relaxed trading as the market indicators become more clear about which and where indicators may take us. If there is a strong break over $262 and it is supported by robust trade volume then I would recommend a switch to more long term positions prior to any breakout pulls back towards the upper or lower support levels. If this bullish momentum cannot push through the $262 level or towards upper support then there could be a massive market relapse towards $230, likely the probability will collapse as the weekend gets closer. That said, the bitcoin price range is solidly locked between $210 and $260 at this moment and I am cautious about trading one way or another until there are more clear indicators of a range break. In the last report I mentioned a major decision from the Fed and it was issued today and it would appear that they will keep their current conditions given market conditions. So what does this mean for the bitcoin markets? That is a difficult abstraction to predict but it will mean some increased volatility as all market sectors react to the announcement in different ways. A hawkish statement would push up dollar and would put downward pressure on bitcoin to move closer to lower support lines, while a dovish statement would push down the dollar and maintain the elevated bitcoin prices.

“A technical momentum indicator that compares a security’s closing price to its price range over a given time period. The oscillator’s sensitivity to market movements can be reduced by adjusting the time period or by taking a moving average of the result.”

It follows the formula: %K = 100[(C – L14)/(H14 – L14)] where C is the most recent closing price, L14 is the low of the 14 previous trading sessions, and H14 is the highest price traded during the same 14-day period. Anyway, technical definitions aside I use stochastic oscillations in some of my market models for bitcoin prices but their significance is sometimes lacking. In times of low volatility, such as now, they are great for averages across small to medium periods of time and they have some advantages over moving averages; though there are different ways to incorporate these into a trading strategy. Happy trading!

Bitcoin Investments
Will Other Companies Follow Tesla’s Lead and Spend Big on Bitcoins?
2 years ago
1017