As mentioned in a previous post, market price has finally worked its way into the upper support at the $240 mark and has held strongly above $230 with an upward trendline to $240.I can happily say that I get to eat these words and we can move forward since the price breakthrough was strongly through $230. Let’s have a brief recap of what I said in the last market watch:

“… I would like to remain neutral on any official trade recommendations at least until the market can break through $230 and the trend line runs parallel to $240.”

Now I can officially get behind some trade recommendations but there are some market conditions to talk about before that, I promise it will be worth it. There has been some significant trade volume over the last few days and particularly since right before the weekend. Even with this increase in trading volume, it has been somewhat lackluster when compared with the first quarter of this year; this is a somewhat skeptical market indicator about the recent price movement. Volatility is as low as it has been for awhile, even to the point of all time lows, and there has not been any bearish action to rail against. So it looks like there will be more gains in the near term. For the first time ever let’s take a look at a volume chart over the last seven days: 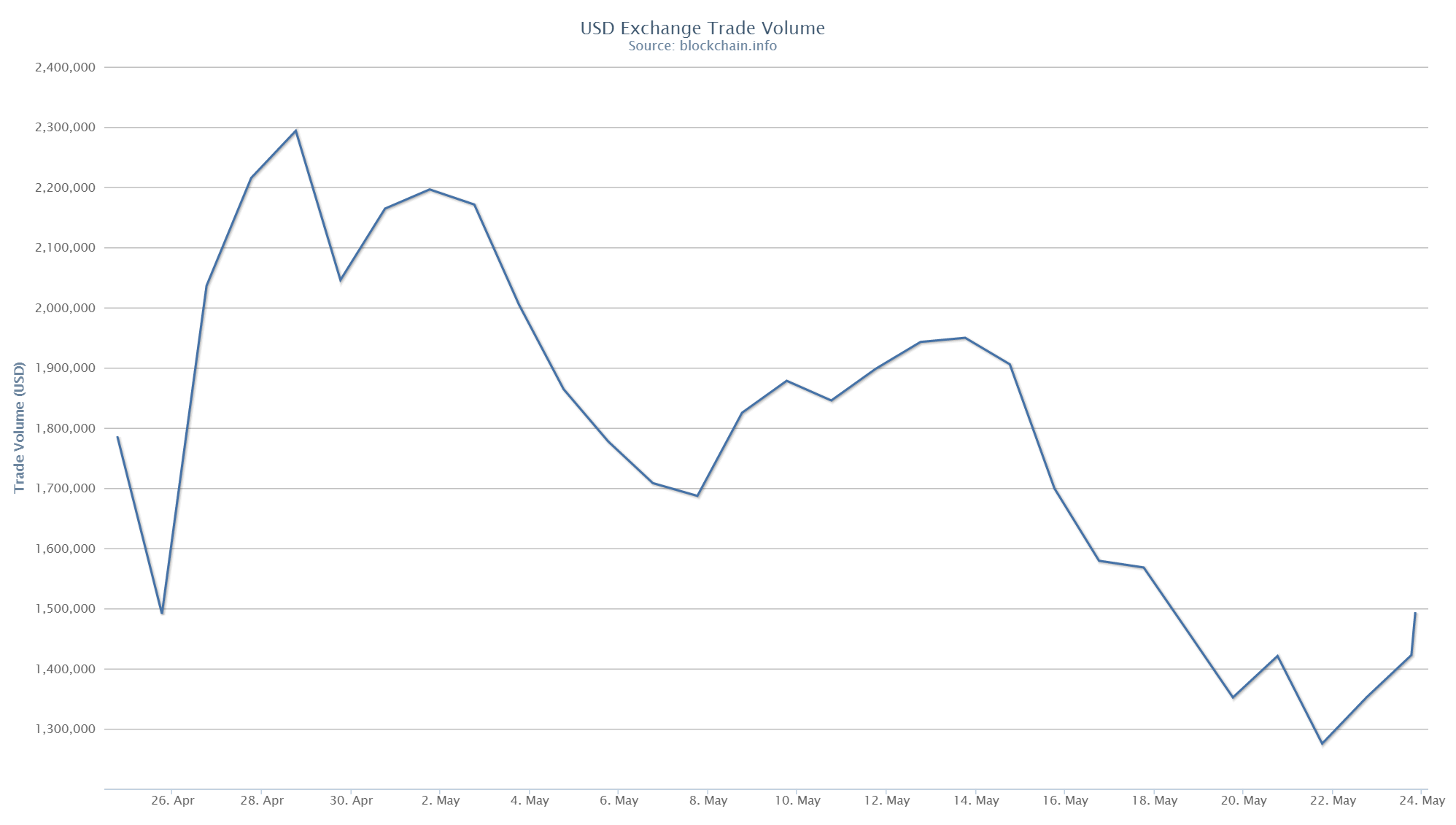 While there has been a negative trend in volume over the last seven days, there are some solid upward inflection points to look at. On May 6th market volume moved out and away from the localized low of 1.7 million back up to almost 2 million, this is our first inflection point. On May 22nd there was an even more pronounced volume increase from 1.4 million to 1.5 million; indeed, the point’s slope is distinct and more or less corresponds with the price increase we have seen over the past few days at $240. Anyway, now that I have rambled on some about transactional volume levels I think it is time for an actual chart! Let’s look at the 30 minute chart: 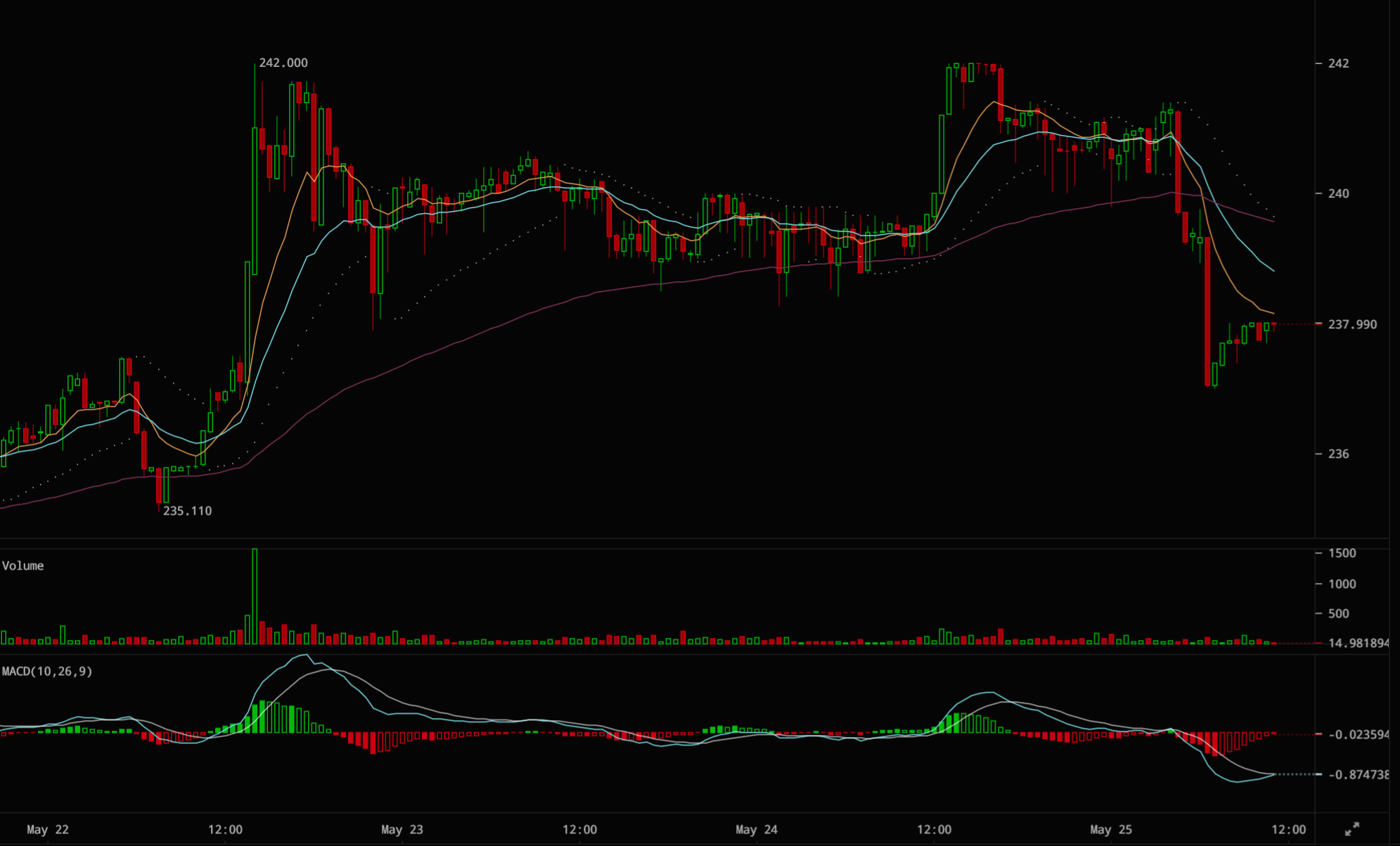 I would say that there has been solid action both before and after this past weekend, with a market rally from $235 to $242 and a sell off this morning with a level movement back towards $238. Over the weekend the market seemed pretty directionless despite the rally we saw at the end of last week; the series of higher lows over the past month or so could point to an overall upward trend around $240 as price has edged higher over a longer period of time. That said, the market has again moved into somewhat overbought territory as traders want to get in on potential higher prices and buy orders stack up, this is especially true as we move into on target earnings near $250. I do not think that price will hit the $250 mark this early in the week, it is definitely too early to call that, but the upper resistance band is definitely around this level. Indeed, at $250 there will be heavy resistance from the bearish market that has held over the past eighteen months; remember, it will take time to potentially move out into a sustainable bull market.

Now I will talk a little bit about the alternative: if price does not hold near or above the $240 level. I know that people will not like to move into this part of the discussion but it is a possibility and mental preparation is part of the game. Price could have a downward trend towards $230 though there fortunately are not any market indicators to suggest this. I want to remain cautiously positive on a price movement towards $240 to $245 for the next day or so but anything more than that and I would veer into neutral territory.

Today’s word is moving average, or MA for short:

“A widely used indicator in technical analysis that helps smooth out price action by filtering out the “noise” from random price fluctuations. A moving average (MA) is a trend-following or lagging indicator because it is based on past prices. The two basic and commonly used MAs are the simple moving average (SMA), which is the simple average of a security over a defined number of time periods, and the exponential moving average (EMA), which gives bigger weight to more recent prices. The most common applications of MAs are to identify the trend direction and to determine support and resistance levels. While MAs are useful enough on their own, they also form the basis for other indicators such as the Moving Average Convergence Divergence (MACD).”

MA’s are important in any kind of market analysis, particularly with the bitcoin market and the key role of volatility, though it has been at nearly historic lows in the past couple of months. Since price has hung around $220 for the greater part of the last few weeks, I would call this our main MA even though there have been some price movements above and below this level; it is exactly that: an average. Again I am happy to say that our MA’s have experienced some positive market pressure and have narrowed above $220, let’s hope for even more of a climb. Happy trading!

Bitcoin Investments
Will Other Companies Follow Tesla’s Lead and Spend Big on Bitcoins?
2 years ago
1017