After the slight price slowdown from $240 early in the weekend back to $236 it was pleasant to see a rally with retested resistance around the $239 level. However, that said, the market still has not managed to have a significant breakthrough past $240 and it has since slumped back into a sideways pattern that we have seen a lot of recently. While there was some price increase this weekend it was fairly muted after further consideration and reflection, especially with the market move median movement back into $235. Price range has been uneven at best and it looks like there will be some exploration into the lower $230 range; unfortunately this means that it will be something of a trader’s sandbox since it is hard to determine where market momentum may go from here. Let’s take a look at the 30 minute chart: 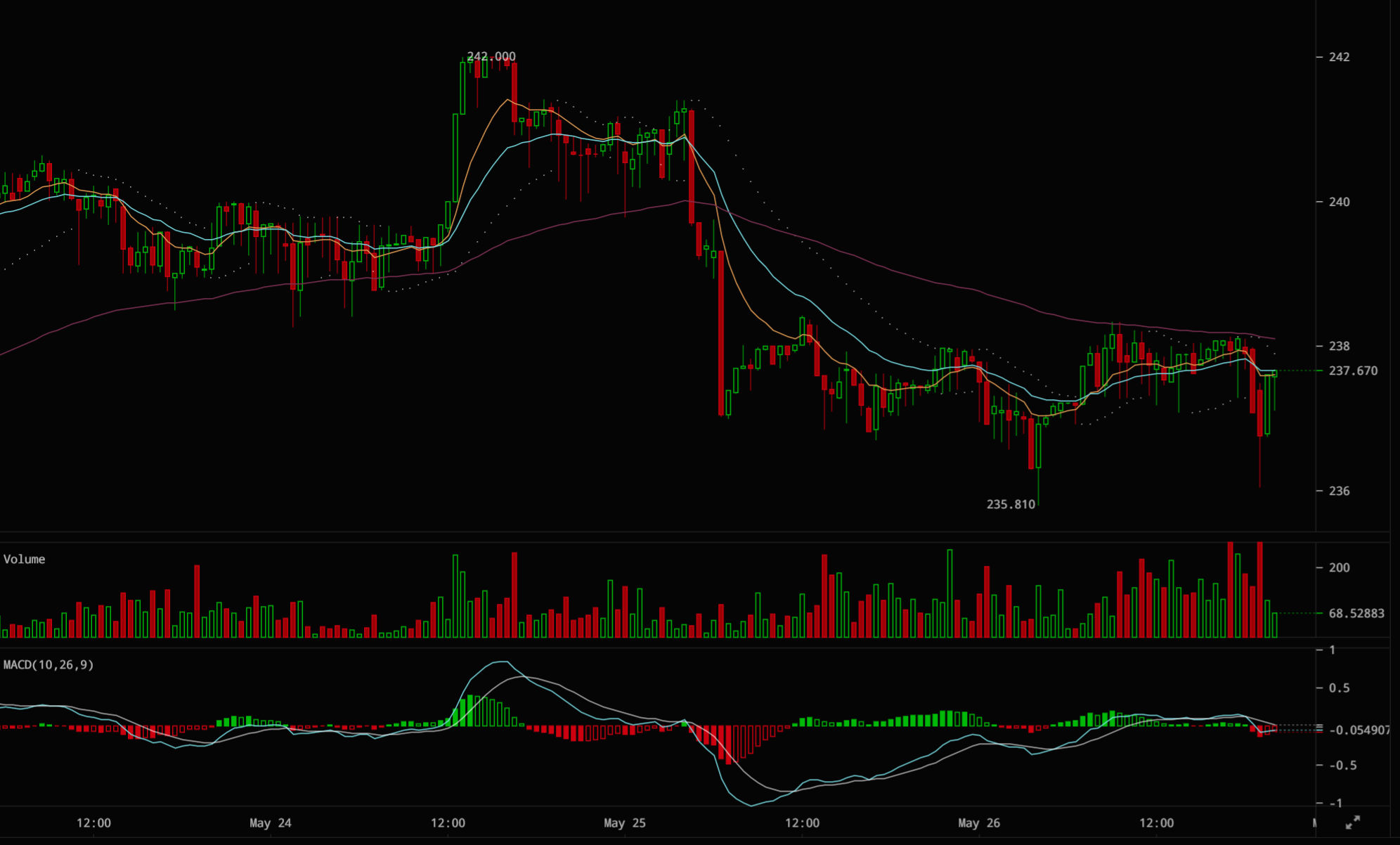 I have been waiting, along with everyone else, for that coveted market stabilization so that trades can become more favorable but it just has not happened yet. Yesterday I had a slightly favorable trade recommendation but I need to reevaluate at this point, so I have returned to a neutral position for the immediate future. Market neutrality is not a bad position to be since there is always the opportunity for different strategies but there needs to be a substantial range breakout, directionality is not that important, since it is a key market indicator. Any technicals at this point are fairly grounded in the same trade neutrality since price has not been able to move above the 50% Fibonacci level; volume saturation has also played a role here. All of this makes sense given the bullish block support at the $235 level and the upper bearish resistance at $242.

Yesterday I talked about moving averages and here it is again! If the moving average resistance can move to a range of $241 to $243 on the weekly level, there might be a chance for a new trade recommendation. To do this, price levels would have to break through in addition to significant volume that would need to hold for at least a day; after this situation there could be a strong market rally up to $250! I have to be honest though, this is pretty speculative and I am not too optimistic of a price range being broken with the mixed market indicators available right now. Sideways it is!

“An options strategy whereby an investor holds a long position in an asset and writes (sells) call options on that same asset in an attempt to generate increased income from the asset. This is often employed when an investor has a short-term neutral view on the asset and for this reason hold the asset long and simultaneously have a short position via the option to generate income from the option premium. This is also known as a “buy-write”.”

So this is a little bit awkward since I had to change my trade recommendation from slightly positive to neutral but it is a good learning opportunity. I have some of my traditional stock assets in a “covered call” state for long term holding and the chance at short term gains as well; this can be applied to bitcoin as well. If you are a long term holder and decide to take a margin position or short sell then you can pick up some of the same income benefits, though trading fees could stack up quickly. Happy trading!