The market has been going every which way over the past few days, bitcoin price has ranged from $240 to $260 with the blood of bears and bulls shed everywhere! I would not say that the market is stagnant by any stretch of the imagination but if I were to construct a trading metaphor I would call it a garden; both bears and bulls have been mulched into trade fodder as the market barrels where it will. The market range bounds have been the most frustrating part of current trading conditions, though fortunately the short term technicals have returned to a more pronounced and controlled model (this is really, really good for more predictive-based trading). When there is a situation change like this it is an indication that a new higher price equilibrium is on the way and this would indicate there will be another part to the current upside trend after price consolidation. I can finally say that the market has hit a good trading region since the price range has hit between $240 and $250 and is firmly established.

Let us take a look at the 2 hour mark: 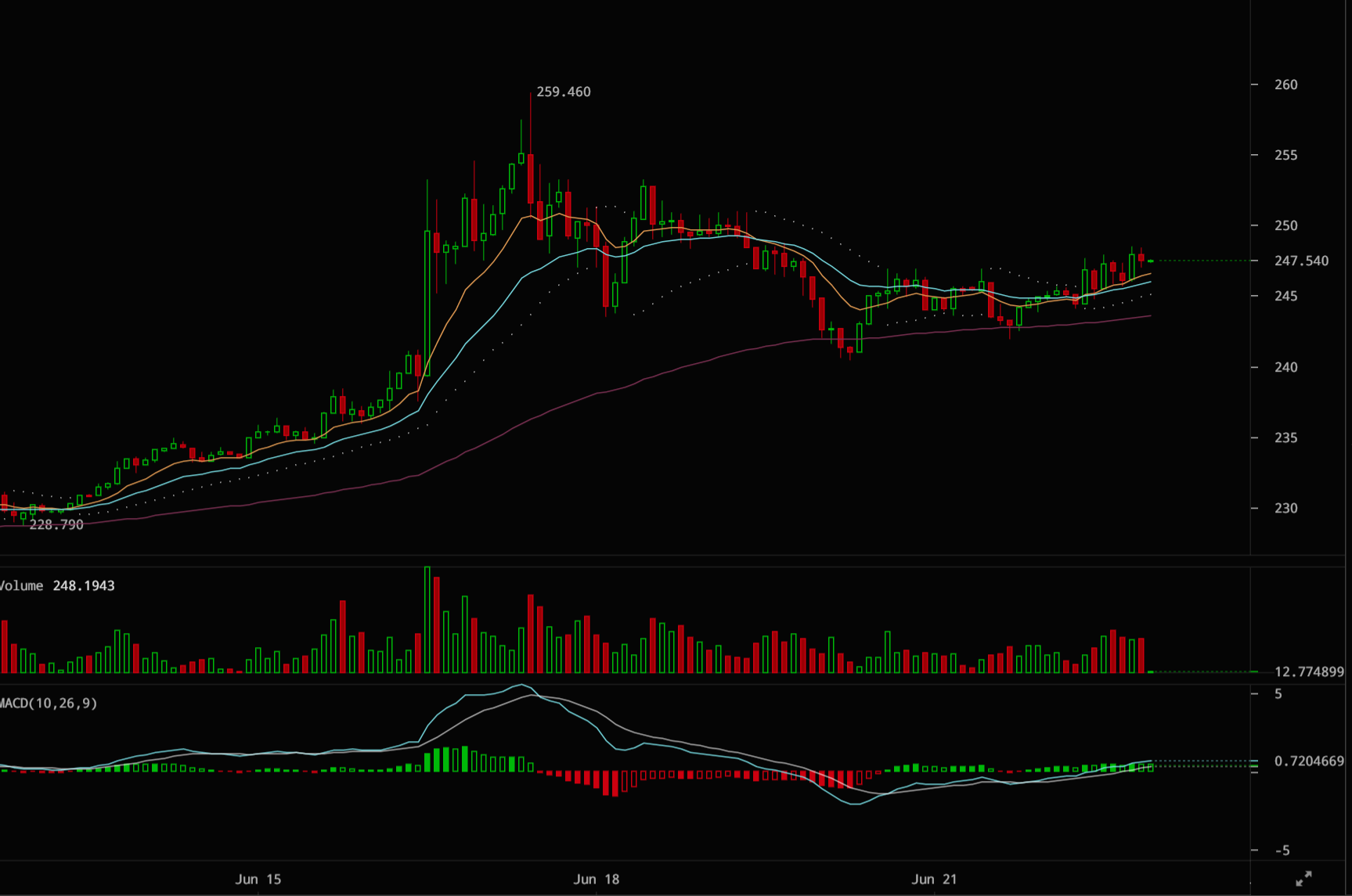 There are some interesting technical things happening all at the same time right now. First and most importantly is the price rally off the local low of $240 that has been overbought as the level approach has moved towards an institutional supply area and the on target earnings short zone; though these mostly corrective measures. That said, sell volume has been surprisingly low given the price increase zone and as advance and decline accumulation has stacked up more and more. Again the market has moved into a bullish environment so this is to be expected, especially since the recent move towards $259 really exceeded on target earnings short positions predicted over the last few days. Down to the small decimals, price has rallied to the top at the 162% Fibonacci extension and has only slightly flattened out near the support level with a strongly positive parabolic trend. Current analysis aside, let us take a quick look at the azop daily measure of volatility:

Again near historically low volatility levels as we look at the longer game and price ranges; this is the key for long term implications. These types of price movement for bitcoin remind of the legacy foreign exchange markets, where there are sharp price spikes that happen regardless of market buy and sell saturation. Indeed, the market has chiefly ignored the overbought and oversold indicators and has held to the decimal on institutional take profit points near the 162% Fibonacci sequence I mentioned before; this may indicate that more institutional money has moved into the bitcoin capital realm! Though this is only one of many different market indicators that I have noticed in the way of net capital market movements as they may or may not flow into bitcoin.

Today’s food for thought is “modified internal rate of return” or MIRR for short:

It would follow that an MIRR is particularly useful when we talk about institutional capital and how it may move into bitcoin, though it largely would be found in legacy stock reports. Though it will certainly become more relevant as stocks like $GBTC and any other bitcoin ETF’s come on the legacy market and MIRR’s will be reported as usual. Happy trading!