We reviewed countless casinos during 2020, many of which were newly launched. They were all eager to take advantage of the huge surge that this industry experienced during the year we’d all like to forget.

Some of these sites have received top marks from us and can still be found near the very top of our online casino list. Cadabrus Casino is a great example. Not only does it look great but it ticks all boxes with regards to games, promotions, payment methods, and more. The question is, where does Betsofa fit into all of this? 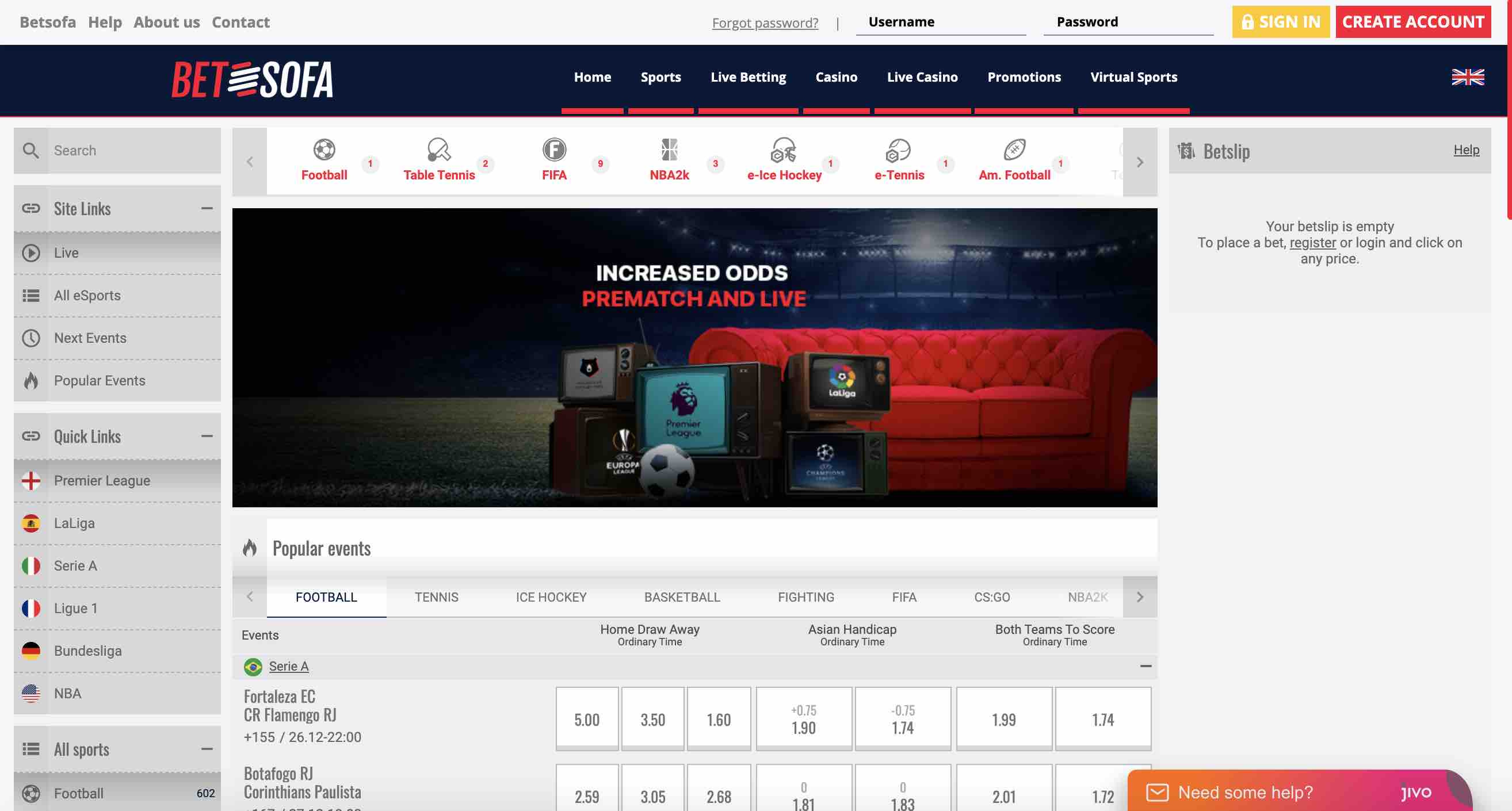 Betsofa seems to target Russian players first and foremost, but its services are also available in Canada, Australia, and many other major gambling regions. The site can be accessed in both English and Russian and there is support for a number of currencies, covering both traditional methods and cryptocurrencies.

The site’s only license is provided by the authorities of Curacao. It does show a Malta Gaming License badge on its homepage, but this is a little misleading.

The license links to EveryMatrix, a white label iGaming provider. It’s not entirely false, as EveryMatrix provides the games, platform, and payment options for Betsofa, but we’re sure that some players will be a little frustrated by the inclusion of that badge.

XXL Services N.V. is the owner and operator of Betsofa. Unlike Araxio, Direx, Mirage, and DAMA, which have launched numerous online casinos, this is XXL Services’ first foray into the online gambling market (as far as we can tell).

Still, that’s not a bad thing and doesn’t really mean anything one way or the other. Some of the best sites we have reviewed are operated by these big names, but they have also dropped the ball a few times, so they are far from infallible.

We have reviewed hundreds of casinos over the years and we’ve seen some shockers in that time. Many sites look dated, others are riddled with errors, and some look like they were made using GeoCities circa 1995.

Betsofa doesn’t actually look that bad. In fact, we have to give credit to the designers as they have done a relatively good job. It’s not the best-looking casino we have reviewed but it’s far from the worst. In fact, navigation is very smooth, there are no headache-inducing colour schemes, and we were actually very pleasantly surprised with how good it looked.

Now for the bad part: the writing, or rather, the taglines, as most of the site’s content isn’t that bad.

We won’t go into detail, but the main image will tell you all that you need to know. It states “Welcome on the Sofa” followed by, “We are proud with your choice. Well done!”

It’s not going to win any awards for the most creative or enticing tagline. In fact, we’re fairly confident that it was written by Google Translate, possibly following a quick conversion from its native Russian (and presumably without any involvement from an editor).

We’re nit-picking but writing like this is a massive turn off for us. We want to feel like the casino actually wants to accept players in our language, and if they did, they would go to the trouble of hiring a native writer. It doesn’t even need to be written from scratch, a simple conversion and rewrite would work!

Without it, the casino looks very poor and puts Betsofa on par with uninspiring sites like WCasino.

It’s a shame, because the aesthetics are spot on, and if not for some poorly worded content, our first impression of this site would have been top notch. 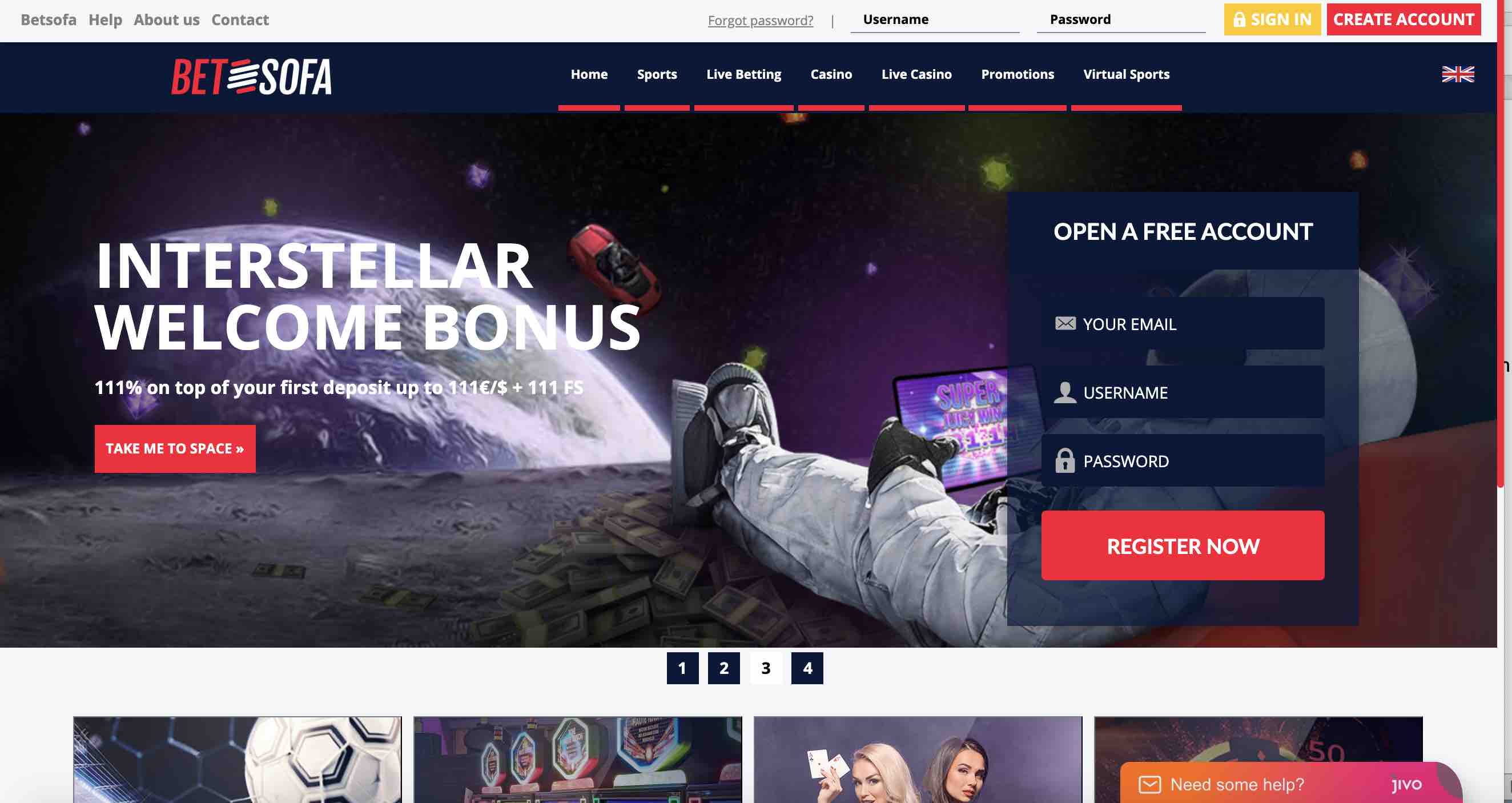 At the time of writing, Betsofa has just under 900 games. It’s not the biggest games room we have seen and it pales in comparison to monstrous casinos like MELbet, but it falls firmly in the Goldilocks zone.

It’s not too much, it’s not too little, and while we wouldn’t exactly call it a perfect amount, it should certain be enough to meet the needs of most players.

These games can be filtered by category and provider. We tend to lean more toward the latter option, as we know what we enjoy and like to narrow games down to our favourite creators where possible. You can see a full list of developers at the bottom of this Betsofa review, but we have highlighted some of the best ones below, along with the reasons you should check them out:

In addition to its many casino games, Betsofa has a compact sportsbook with a varied selection of pre-game and in-play betting markets.

As is so often the case, it has a large selection of football markets and spans most major international competitions, as well as European leagues like the English Premier League and Spanish La Liga.

The layout isn’t great and uses a simple grey-on-white aesthetic that somehow manages to be dull and easy to use at the same time. We prefer the layout of sportsbooks like Rabona from Araxio, but Betsofa will work for some people.

One of the great things about this sportsbook, and something that we’ve seen in a number of other recently-launched betting sites, is that it has a wide variety of e-sports betting markets. It has fully embraced this fast-moving industry and allows punters to be on everything from FIFA to League of Legends and Hearthstone.

Virtual sports are available as well. These simulated events allow you to bet on sports around the clock, with only a few minutes break in between. There are events covering football, racing, tennis, and more.

For more info on how these games work, and to see many more titles like them, take a look at our Fezbet review.

Betsofa doesn’t have the largest Welcome Bonus, which is a bit of a disappointment. We’re used to casinos offering upwards of 1 BTC or several thousand Euros at a time.

Betsofa, on the other hand, offers just €111 as a 111% matched deposit offer. It also provides qualifying depositors with a total of 111 Free Spins.

If you’re wondering where the “111” theme comes into play, we have no idea. It seems to be completely random.

On the plus side, there are other bonuses available and some of these are a little more interesting. For example, Betsofa has a Cashback bonus that offers as much as 21%. It’s not implemented in the best way, however, as you need to take a screenshot as proof and then send this to the customer support team.

It’s certainly a unique way of doing things, and we can’t say that we like it much.

Other bonuses include a Free Bet offer for all new members of the Betsofa sports book. At the time of writing, you can get a 100% Free Bet bonus up to €55, before using these credits to place bets on the hundreds of different sports betting markets. 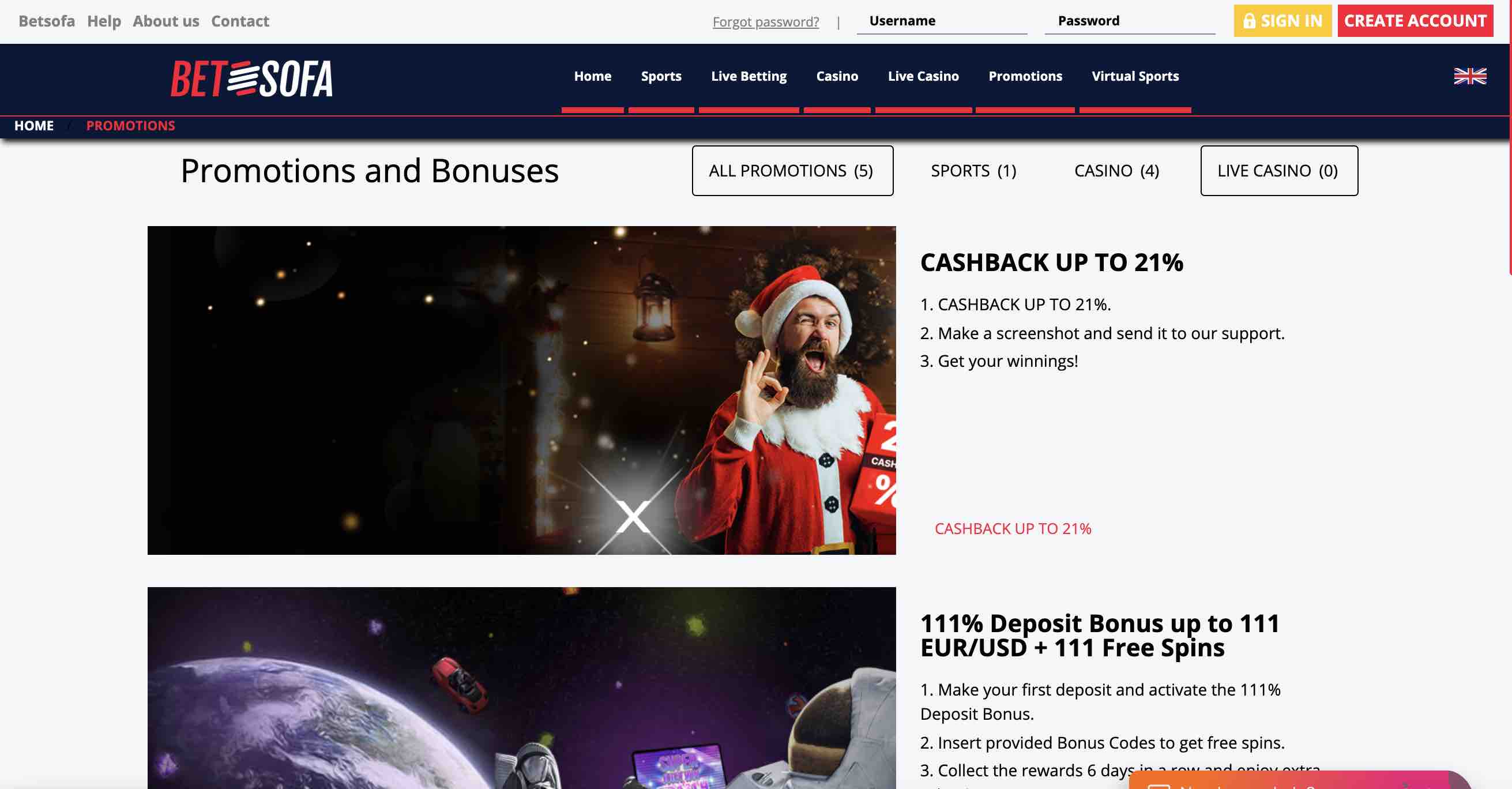 Betsofa accepts both cryptocurrencies and traditional payment methods, with a broad selection available. Take a look at the table below this Betsofa review for a full list.

Withdrawals are processed fairly quickly at Betsofa and it takes just a few hours for most players to get their funds. That’s great news, but it stops there, as Betsofa has a very strict withdrawal limit.

However, it’s still not acceptable in an industry that targets big spending cryptocurrency users. Imagine how disappointed you would be if you were depositing €5,000 at a time, won just 10x, and were told that it would take nearly three months to get all of your money.

It’s crazy, and yet it’s a reality that most high rollers are forced to live with.

It needs to change, and until it does, we won’t stop moaning about these withdrawal limits and the problems that they cause.

What is the Withdrawal Limit?

You can't join Betsofa Casino if you are in the United Kingdom. Other sites will take you, though. Check with our review of Yakocasino for more info.

You can use both English and Russian on Betsofa Casino.

What Currencies Can I Use?

You can use Australian Dollars, Bitcoin, Canadian Dollars, Great British Pounds, and a host of other currencies. Take a look below this review for more information.

What Is the Welcome Bonus?

You can find the latest Betsofa Casino Welcome Bonus at the top of this review. It is subject to change, but we will change the link accordingly.

Our Betsofa review occurred just a few months after the site launched, so there aren’t a great deal of user reviews to draw from. We couldn’t find any instances in which the customer support team responded to these reviews, either, so we can’t really comment on that.

It’s something we often mention and something we discussed at length during our Mr Bit review, for instance, but we haven’t really given Betsofa much of a chance in that department.

Alternatively, if you click the “Contact Us” link in the top left, you’ll find a contact form. This method is a little slower but during our trials we received a response in just 12 hours.

There is also a “Help” link, but this directs you away from the site and onto a page with a very limited number of FAQs. Still, it answers some of the most common questions. As with other content on the site, it’s not very well written in places, but it’s coherent and isn’t too bad on the whole. A simple edit would be enough to polish things up and correct a few awkward mistakes. 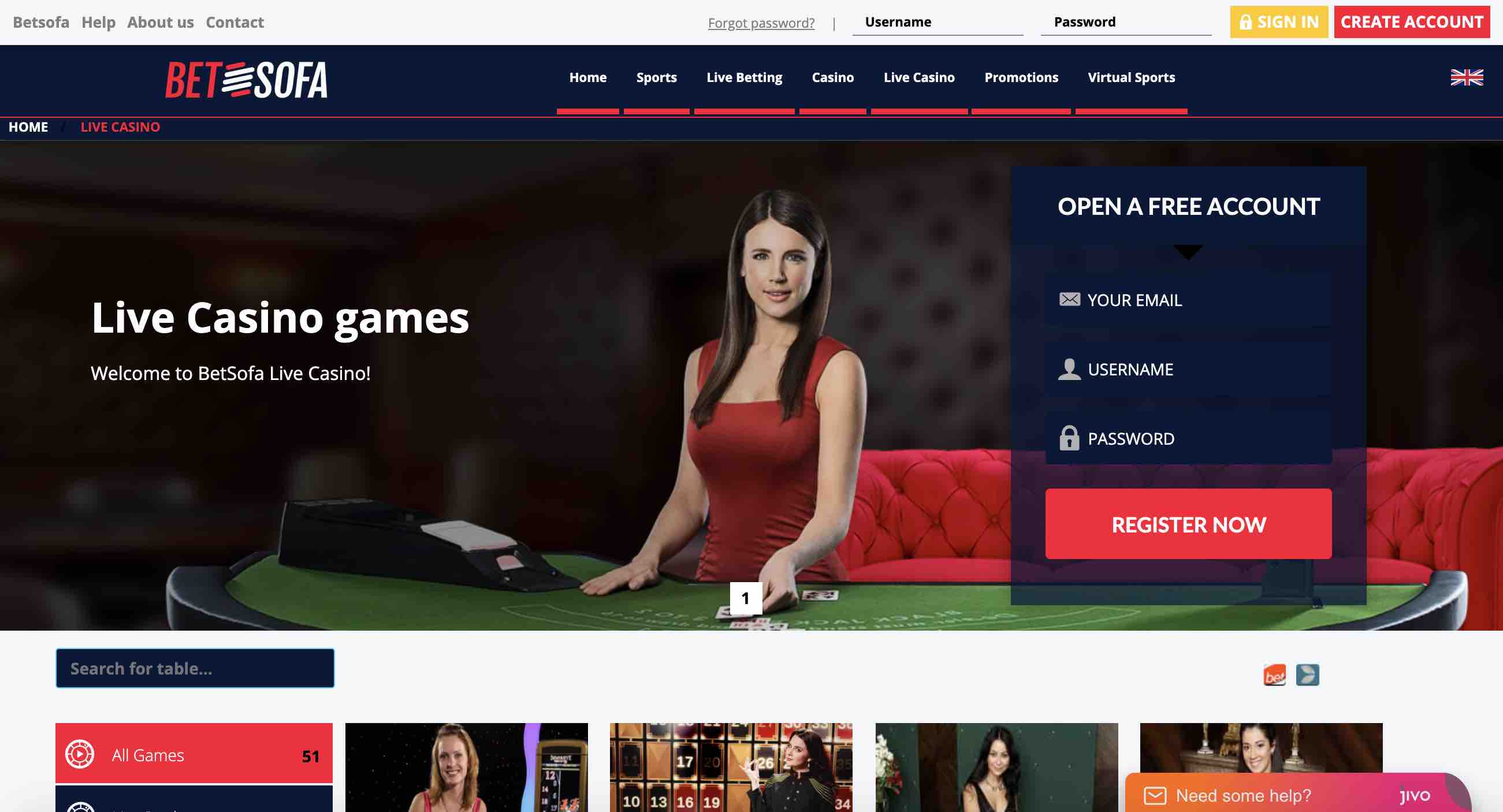 Betsofa is an oddly-named Russian/English casino and sportsbook that feels like a strange mishmash at times but has a lot of interesting features to discover and promotions to unlock. We recommend joining if you’re looking for a casino with a sports book attached and you want to collect some bonuses along the way.

If you’re a high roller, Betsofa is probably not for you. In such cases, you will be better off with a high roller online casino. Just take a look at our online BTC casino top list, which includes a wide selection of the very best casinos, many of which don’t have withdrawal limits.