Spin Away is one of many online casinos that launched in 2020 under license from the authorities of Curacao. Owned and operated by Ngame N.V., the site has had several months to grow and to establish itself. The player reviews have been coming thick and fast and it has also been expanding its offerings with regard to games and bonuses.

In this review, I’ll take a closer look at Spin Away, seeing what it has to offer players like yourself and how it compares to some of the highest-rated BTC casinos we have covered recently. 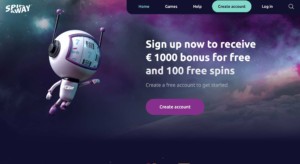 I have criticised a lot of online casino themes in recent years, noting how many of them are very bland and uninspiring while others try to do too much and completely mess things up. Spin Away doesn’t make any of those mistakes and is actually a very attractive site. It reminds me somewhat of Cadabrus Casino. It’s not as busy and the theme is different, but the vibe and the polish is the same.

It’s also very easy on the eye, and that’s something I don’t get to say very often when it comes to online casinos.

Spin Away has a space theme and its mascot is a spaceman with a giant slot machine for a head. Everything is nearly arranged. It’s easy to find what you’re looking for, and it looks good on most platforms.

What more could you ask for?

Spin Away plays host to over 1,400 slots, along with a small selection of table games and a variety of Live Casino titles. The games are provided by some big named developers, including NetEnt, Red Tiger Gaming, Microgaming, Play’n GO, Wazdan, Playson, and Pragmatic Play.

A few of my personal favourites are here, including Guns N’ Roses, Jack Hammer 2, Finn and the Swirly Spin, and Mega Moolah. You can also take your pick from some massively popular real money slots, including Book of Dead and Immortal Romance.

The Live Casino games are provided by Evolution Gaming and Pragmatic Play, which means you can play everything from Lightning Roulette and Live Baccarat to Monopoly Live, Sic Bo, and Mega Ball.

It’s definitely a slot-heavy casino. That’s where the focus is and it’s where the site excels. However, there are a surprising number of Live Casino games, as well.

The Spin Away Welcome Bonus offers up to €1,000 in total, and this is spread across your first three qualifying deposits:

It’s not quite as high as some of the bonuses being offered elsewhere, including the one currently available at 1xBit, but it’s not to be sniffed at!

After all, if you’re depositing within those means, higher limits won’t mean anything to you. If you’re only loading your account with €50 reach time, a maximum of €50 is just the same as a maximum of €5,000.

There isn’t much info about Loyalty Bonuses, but these do exist. They are often supplied in the form of reload bonuses and Free Spins and they are designed with loyal players in mind.

If you prefer something more substantial, I recommend checking my review of Kingdom Casino, instead. Not only does it have a great theme and lots of fun games, but it also has a massive Loyalty Scheme where you can earn points every time you play. These points can then be turned into prizes and payouts, giving you more incentive to stick around and keep the deposits and spins flowing. 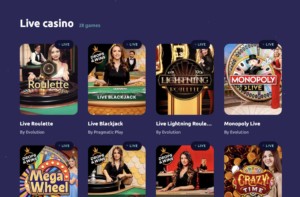 Most withdrawals are processed in under 24 hours, and there is a withdrawal limit of €4,000 per day and €50,000 per month. The limit is usually enough to get negative marks. It’s something I have complained about many times before, including in reviews of Cadoola Casino. In this case, however, €50,000 a month is huge and it should be enough to cater for the needs of most players.

You have to be gambling a lot of money to get anywhere near that amount. Of course, a progressive jackpot will clear it pretty quickly, but progressive jackpots are paid by the developer and not by the casino, so you shouldn’t have an issue in that regard.

That’s not always true, and there have been some problems in the past, but it’s a fairly impressive withdrawal cap when you compare it to other sites.

Cryptocurrencies and web wallets like Skrill are by far the best way to play at Spin Away. If you are in Canada, you should also consider options like Interac, which is massively popular in the Great White North, and not without reason.

If you stick with Visa and Mastercard instead, you will need to wait up to 5 days to receive your funds. It’s not that the casino is slow, but that the method itself needs a few days to clear. Once you add a potential pending time of 24 hours on top of that usual wait, it becomes an impractical option.

There isn’t a great deal of reviews out there for Spin Away, although that’s not much of a surprise considering the site is less than a year old at the time of writing. The reviews that do exist are somewhat middling, with players praising the simplicity of the site and the size of the bonuses, but complaining about some minor issues.

Most of these issues revolve around the casino’s customer support, or lack thereof. I have seen a few complaints regarding the verification process, with players stating that they did what was asked of them but never received confirmation. In one review, the player says that they never received an email to confirm that their ID has been accepted but that their account page was showing the process as being finalised.

In other words, it could be that the process really is quick, simple, and painless, but that the casino just isn’t sending out confirmation emails. I’m not sure why that would be the case, but it’s not a big issue.

I’ve run a few small businesses myself and I have also worked for many more. It’s incredibly common to see issues with automated emails, especially since the initiation of GDPR rules. Sites are so wary of sending unsolicited messages that they set strict rules regarding their emails. Sometimes, these rules prevent all emails from being sent and may even stop some from being received.

It’s not something that you need to worry about. However, there is something more pressing, and that’s the lack of Live Chat.

According to other reviews of Spin Away, and the Spin Away website itself, Live Chat is throughout the day. If that’s the case, it must only be true for active members, as I wasn’t able to access any such feature. In fact, the only option that I had as a non-member was to send them an email using a contact form. It’s one of the slowest and most frustrating ways of dealing with a casino, but your options improve when you actually sign up for an account.

Another minor concern with Spin Away is the lack of customer service responses to reviews and complaints. I have stressed the importance of responding to reviews many times in the past, including in my review of BetsEdge Casino.

It shows that the casino is willing to go the extra mile. It also gives you an outlet if the casino isn’t responding to your messages. After all, the teams that are usually asked to deal with customer reviews tend to have more power than standard customer support teams. They won’t just give you copy pasted replies when you contact them.

So, if you can’t get your point across to the customer support team, you can leave a review and go higher up the chain of command. When the casino doesn’t respond to reviews, you don’t have that option.

Usually, it’s not a massive issue, but it becomes a problem when the casino in question doesn’t have the best reputation for responding to its clients and offering them ways to getting in touch.

When Was Spin Away Founded?

Spin Away Casino was founded in 2020. I have lost count of how many times I have written words to that effect. 2020 may have been a pretty crappy year for the world on the whole but it seems to have been a big year for the online gambling industry.

Can I Use Bitcoins at Spin Away Casino?

Yes! You are free to use most popular cryptocurrencies at this online casino. For more sites that accept this popular payment method, take a look at my Slotman Casino review.

It is very safe and fair. It’s regulated, after all, and it also works with licensed developers and secure payment methods. That doesn’t mean that it will always honor bonuses and respond to your complaints in super-fast time. That’s not what defines a legitimate casino. But you definitely shouldn’t be worried about scams.

You can play directly through your mobile browser, and that’s true regardless of the platform that you use. Play on Android or iOS—just connect through your web browser and you’re good to go!

Spin Away has a license from the authorities of Curacao and it is not licensed by the UK Gambling Commission. As a result, players in the UK cannot legally play here. Surprisingly, it will still let you access the site from the UK, which is somewhat unusual, but you can’t join and play and you shouldn’t try, either. I have seen reports of people getting around restrictions like this by using VPNs, but eventually you will be asked to submit ID verification, at which point your location will become clear and your account will be suspended. 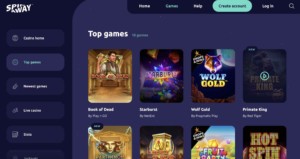 Two of the biggest issues with many modern Curacao casinos is the speed of the withdrawals and the limits placed on those withdrawals. In many cases, you are forced to wait for at least 2 days before the funds are transferred (sometimes it can be 3 or 4), and you are also restricted to withdrawals of no more than €10,000 a month.

It’s very limiting, and if you are an active gambling with a high bankroll, it’s pretty much a dealbreaker.

Thankfully, Spin Away doesn’t suffer from any of these issues. The withdrawals are usually processed very quickly, you have lots of payment options to choose from, and while there is a withdrawal limit, it’s fixed at a generous €50,000 a month.

It’s not perfect though, far from it. The customer support side of things needs to be improve, with more options, better times, and availability for non-members. I would have also liked to see a few more loyalty bonuses, as well as a generous Loyalty Scheme.

All things considered, Spin Away is a great online casino and it’s one that I would definitely recommend. Sign up via the links on this page to get the latest Welcome Bonus and start perusing those 1,400+ slots. For more information about the site, including currency options, language options, and restricted countries, take a look at the data below this Spin Away review.

David Jest
David Jest is a journalist, writer, freelancer, and published author with more than 20 years of writing experience. His work has featured on several of the web’s biggest websites pertaining to cryptocurrencies, gambling, sports, and finance. He first began investing in cryptocurrencies back in 2015, making him a little late to the party, but he is now a keen investor and advocate for the industry. When he’s not writing, David spends his time live-streaming sports, playing poker, and enjoys reading about crypto.
Follow David Jest on:
Subscribe
Please login to review
2 Comments
Oldest
Newest Most Voted
Inline Feedbacks
View all reviews

Over 1,400 games. Can’t go wrong with that. Not perfect, but I’m not intending on sticking around very long. All good for me!