GetSlots is an online casino that launched in 2020, offering players a variety of bonuses and a vast selection of casino games during one of the busiest times in iGaming history. It’s a casino that has a little something for everyone and will appeal to both small stake players and high rollers.

Owned by DAMA N.V., GetSlots operates under license from the authorities of Curacao and is a sister site to BetChain Casino. It’s a major iGaming brand and one that specialises in cryptocurrency gambling. DAMA doesn’t have as many casinos under its belt as Direx and Araxio, two other major iGaming brands, but it does operate several award-winning titles.

In fact, despite laying claim to BetChain and several other top-rated Bitcoin-friendly casinos, GetSlots is actually the operator’s biggest and most popular casino. That’s an impressive title and it’s even more impressive when you consider how quickly it was earned.

GetSlots is actually the operator’s biggest and most popular casino.

In this GetSlots review, we’ll go over the features that have helped this casino to standout and become one of the best Bitcoin gambling sites of 2020. 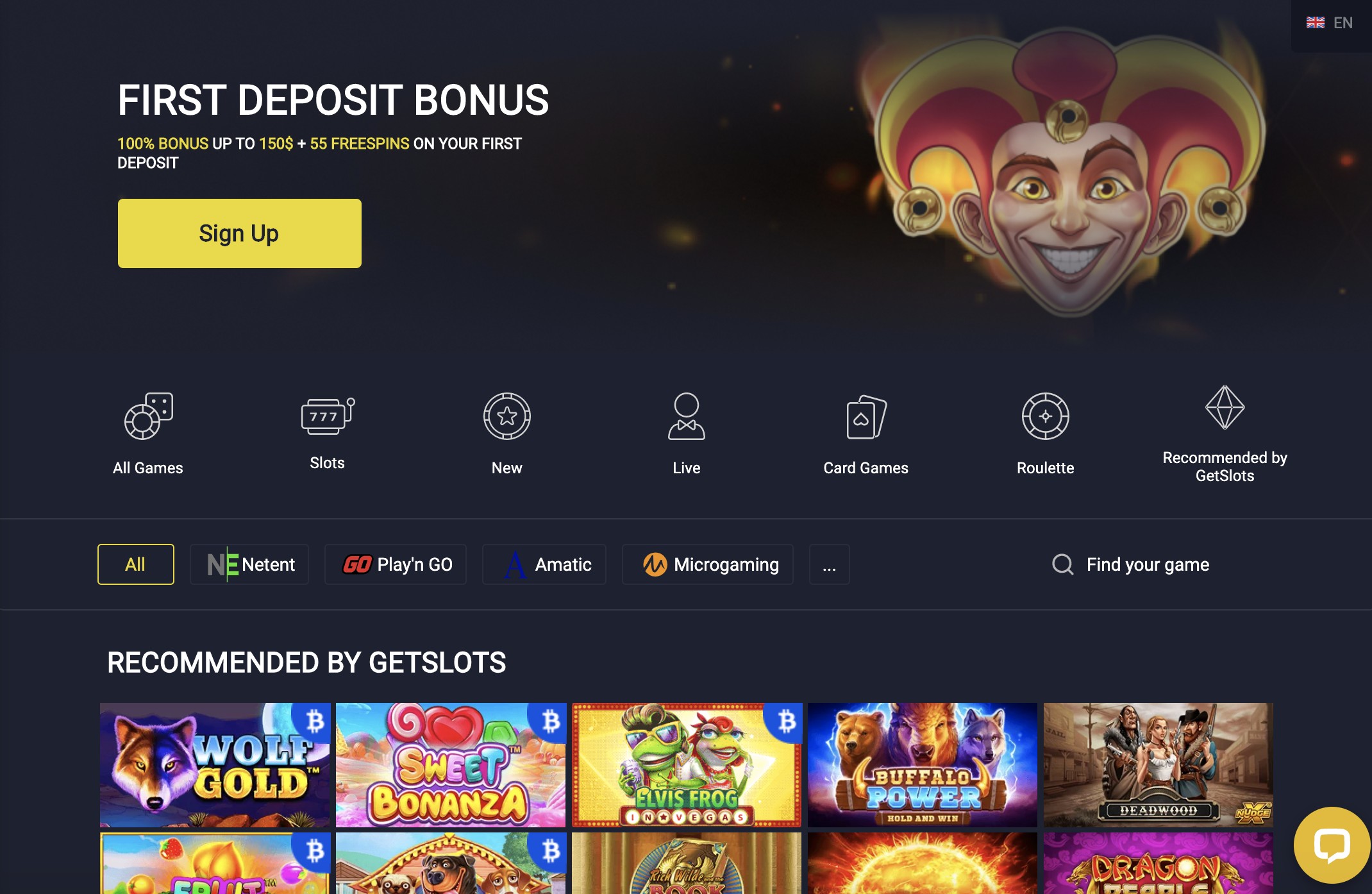 GetSlots has a huge games room, with many top developers providing games for its rapidly expanding roster. These include Wazdan, Booming Games, Playtech, and countless others. You can see a full list underneath this GetSlots casino review.

All games are separated into several different categories and can also be filtered by provider, making it easy to find your favourites. The game categories include: 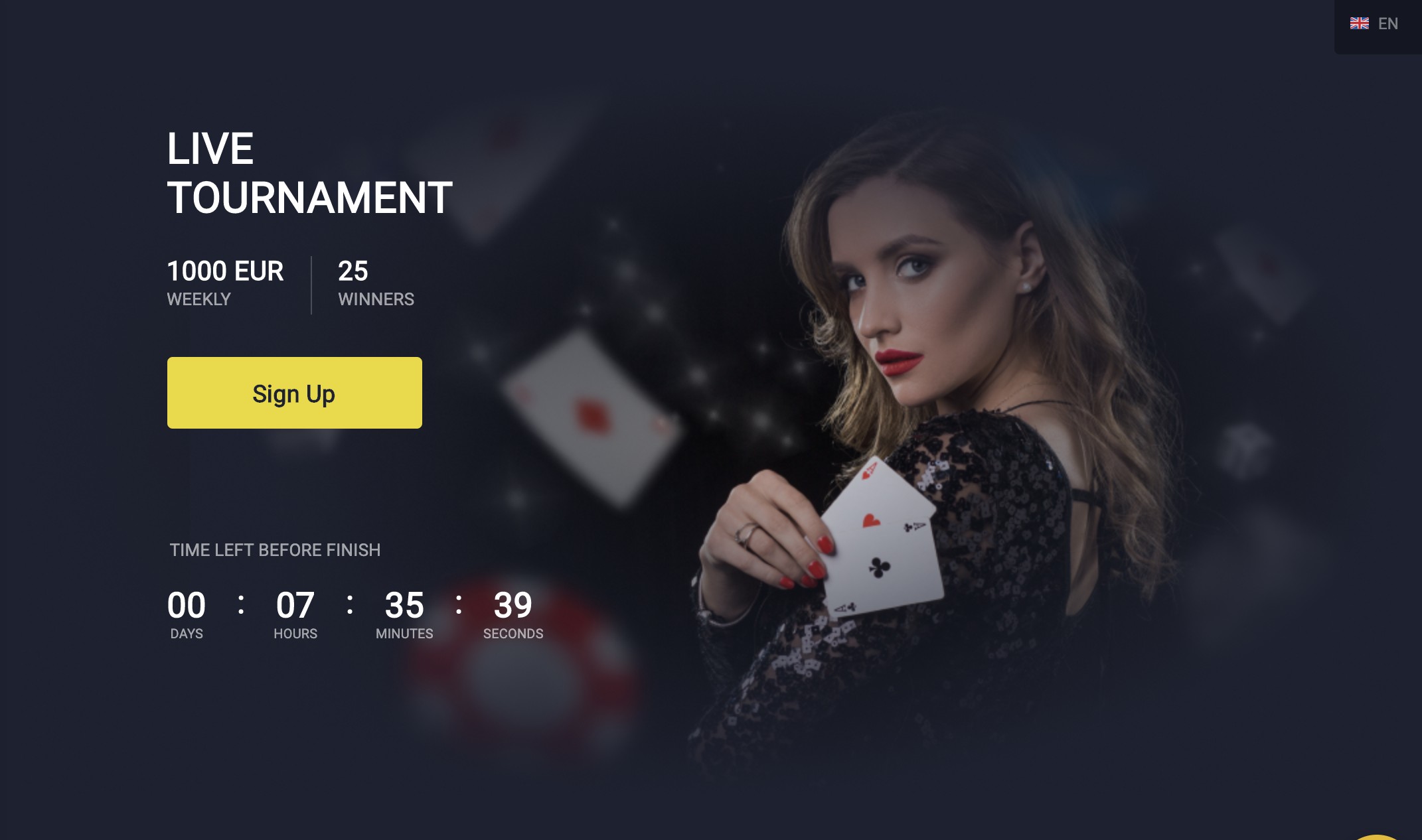 You can play all GetSlots games on mobile and desktop. If you are playing with Bitcoins and other cryptocurrencies, look for the little blue Bitcoin symbol on the game thumbnails. This indicates Bitcoin slots and includes many varied titles.

Along with all of these sections, there is a Weekly Lottery that you can find in the casino’s sidebar. This lottery has a massive Free Spins prize pool and you don’t have to pay to enter. In fact, you don’t have to do anything but play. In that sense, it’s just like the casino’s tournaments (discussed below) in that it gives you an extra chance to win by doing the things you were going to do anyway.

GetSlots has a good selection of bonuses, but these aren’t as sizeable as we would like and pale in comparison to bonuses at FortuneJack Casino and other top Bitcoin casinos.

Firstly, you have the Welcome Bonus, which is spread across your first three deposits. The first of these offers a 100% match up to $150, along with 55 Free Spins. The second is also capped at $150, but this time the match is just 55%, with 100 Free Spins. The final bonus mirrors the first, but without the Free Spins.

It’s worth noting that these bonuses require a minimum deposit of €20 each time, which is higher than the minimum deposit allowed on the casino itself. The Free Spins are fixed to a selection of predetermined slots, and everything is credited straight away.

If this budget isn’t enough to interest you, take a look at the High Roller Bonus instead. This one is capped at a much larger $800, but the matched percentage is just 30%. Reload bonuses are also available, including a Weekend Reload offering a 40% match up to $230, and a host of Free Spin offers.

In addition to these new player bonuses and loyalty bonuses, GetSlots runs a host of tournaments and these are available to everyone with a GetSlots casino account. To participate, you just need to opt-in, stake the minimum, and play the right games. Every time you spin, you’ll climb a leaderboard and take a step closer to the prizes, of which there are many.

At the time of writing, for instance, there are daily tournaments offering up to $500 in cash prizes, along with 500 Free Spins. These prizes are shared between 50 winners, with $200 going to the winner. Cash prizes are paid to the top 15 finishers and the rest take a share of the 500 Free Spins. 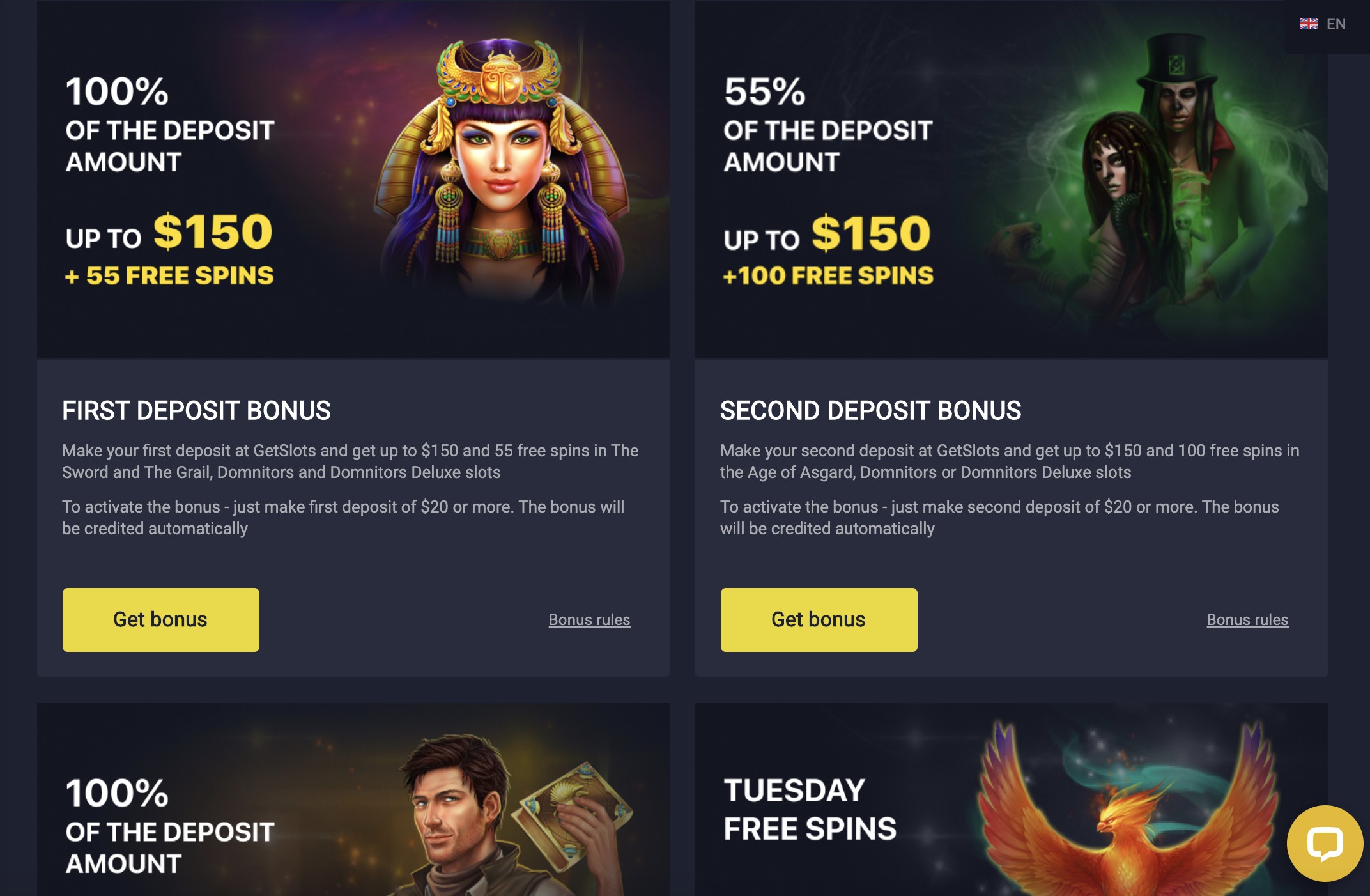 All deposits are free of charge at GetSlots and you have a wide variety of payment methods to choose from, including Visa, ecoPayz, MasterCard, Neteller, QIWI, PaysafeCard, and a number of cryptocurrencies (Bitcoin, Bitcoin Cash, Ethereum, Tether, Dogecoin, and Litecoin).

The minimum deposits range from €10 to €15, depending on the method used, and it’s fixed at 0.001 BTC for Bitcoins, with similar amounts for other cryptocurrencies. The same minimum amounts apply for the withdrawals. As for the maximums, you can deposit up to €20,000 or 1 BTC, but the withdrawals are a little more limited, as noted in the next section.

GetSlots doesn’t sit on your withdrawals for long periods of time. In fact, the pending time is limited to just 60 minutes, and most will be processed instantly. For players using credit cards, debit cards, and bank transfers, this doesn’t mean much, as they will still need to wait a few days to get their funds (albeit a few days less than they otherwise would). For users of web wallets, instant payment methods, and cryptocurrencies, it means all winnings will be processed within a matter of minutes.

Withdrawal limits have been a bone of contention in the online casino industry. It’s a topic that we have touched upon numerous times in the past, and one that comes up frequently during Araxio Casino reviews, including our review of Fezbet Casino. Where those casinos are concerned, players are limited to just €500 per transaction and €10,000 per month, which is very restrictive, to say the least.

A withdrawal limit also exists on GetSlots and while it is not as restrictive, it is still much lower than we would like.

If you visit the GetSlots Payment Options page, you’ll notice that there are limits listed. For Bitcoins it lists the maximum as 1 BTC per transaction and for fiat currency methods the limits are fixed at between €2,500 and €20,000.

If these limits were true, we wouldn’t have so much of an issue. Only the highest of high rollers will need to withdraw more than €20,000 at a time and when they do, they will be happy to wait for the next day or week before they withdraw the rest. But they are not true, and the Terms and Conditions make that abundantly clear.

So, ignore the terms listed on the casino’s official Payment page and focus on the Terms and Conditions instead. If you’re worried about this discrepancy and what it means for the perceived legitimacy of this casino, don’t be. Believe it or not, it’s an issue we have seen with many other online casinos, including some of the best-rated sites we have come across. 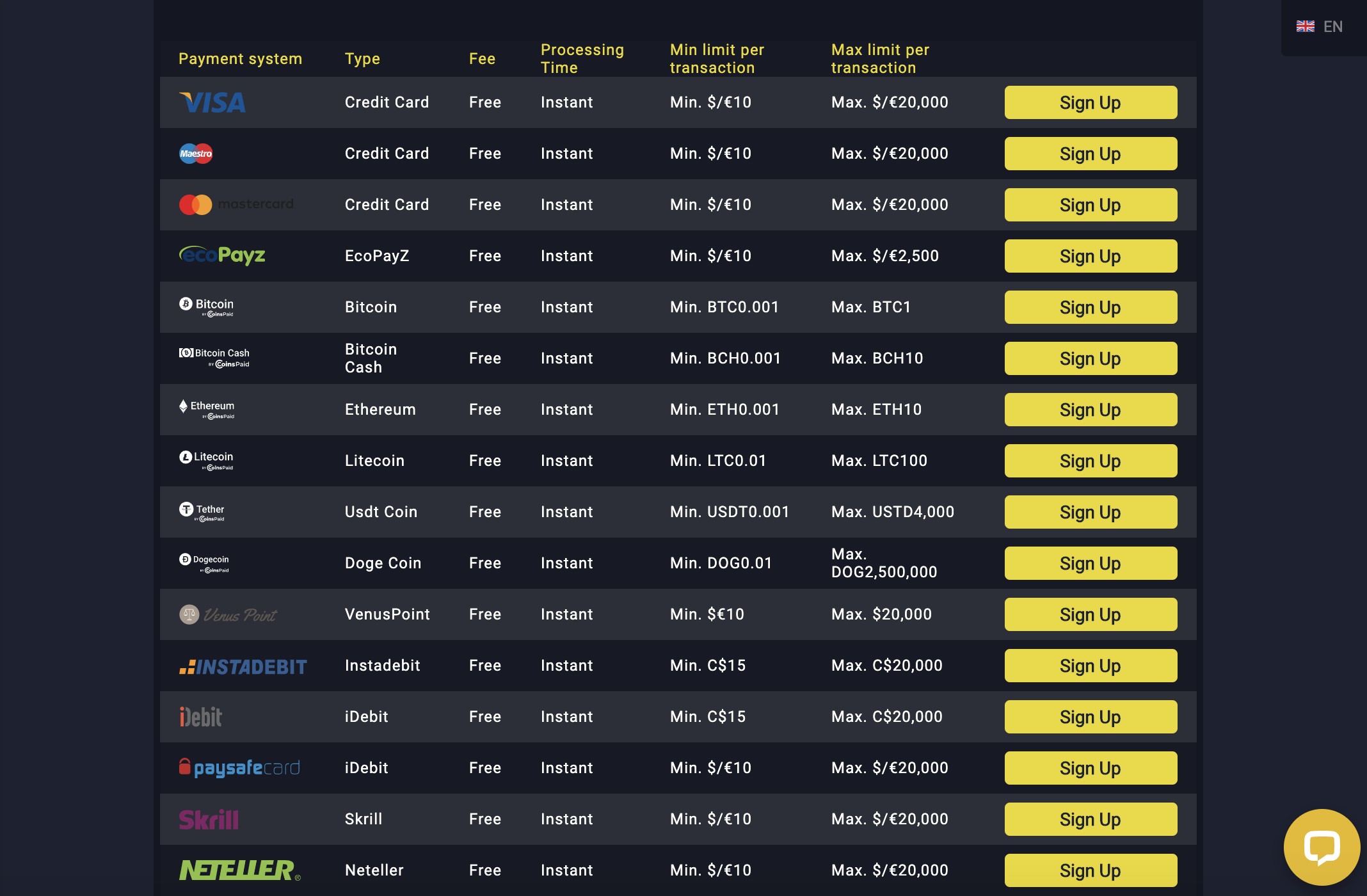 GetSlots reviews are mostly positive, with players praising its choice of bonuses and games above all else. Of the negative reviews, many have highlighted the withdrawal limit, which is something that is also a concern for us. Of course, the withdrawal limit is not too bad and we have seen much worse, but it would be better if it didn’t exist.

One of the best things about GetSlots reviews is that they have all received a response from the company. As we have noted many times before, this is always a good sign as it shows that the casino cares about its players. It’s proof that they are willing to go out of their way to assist, even when the player is clearly just venting about losing some money or missing out on a bonus.

As far as customer support is concerned, GetSlots advertising 24/7 support, most of which is provided via Live Chat. This is a noteworthy albeit not entirely unique feature, as it’s one you will find on many other modern online casinos. In GetSlots’s case, it’s also not true.

Throughout 2020, the casino has struggled with increased demand and limited resources, as is the case with so many other businesses during this chaotic year.

That’s not entirely unexpected and because of the problems that the lockdown forced on companies, including quarantines, sick/isolated staff members, and increased player numbers, we sympathise with them completely. The problem is, GetSlots was only launched in 2020, which means those problems have existed throughout and up to the point of this review.

We’re sure 24/7 customer support will return eventually, but there’s no guarantee. In the meantime, GetSlots has some very helpful and professional customer support, so if you can get through, you’ll get the help you need.

When Did GetSlots Casino Launch?

Can I Use BTC?

Yes, you can use BTCs and other cryptocurrencies at GetSlots Casino.

GetSlots Casino is owned and operated by DAMA, a major casino brand that has many irons in the fire.

Is GetSlots Casino Available in the UK?

No, but many other sites are, including the sportsbook and casino at Pokerstars.

Should I Join GetSlots?

It's up to you. It might not be the best casino out there, but it certainly has a lot to offer, including a Welcome Bonus.

We were a little dubious when we first heard about GetSlots, as it didn’t sound or look like a particularly impressive casino. There was no attention-grabbing theme or logo, and even the name was pretty uninspiring. However, we were a little more hopeful when we realised it was operated by DAMA N.V., the brand behind Oshi Casino and other top sites, and we’re very glad that we gave it a chance.

While GetSlots is not perfect, with the withdrawal limit and bonus sizes letting it down somewhat, it’s still a very impressive online casino and one of the best sites to launch in 2020. If you’re looking for a new bonus to collect, some tournaments to join, and a host of games to play, give it a go.