Hyper Casino is an online casino that adopts a stylish black and yellow aesthetic, with a name, logo, and theme that focuses on speed and lightning. I usually have only negative things to say about casino themes. The vast majority of them are terrible—an offense against good taste. Hyper doesn’t fall into that trap.

On the one hand, it doesn’t try to overdo it and ultimately fall flat. At the same time, however, it doesn’t make the mistake of creating something that looks dull, flat, and uninspired, not unlike the drab WCasino.

The result is not going to win any design awards and I have definitely seen better, but it works for what it is. It’s very easy to navigate, a pleasure to use, and completely inoffensive to the eyes. The white-on-black can be a little over-the-top and headache-inducing, but that’s not the case here.

It’s very easy to navigate, a pleasure to use…

Hyper Casino is owned by L & L Europe. If that name doesn’t ring a bell, you’re not alone. It didn’t stand out to me either and after I looked into it, I realized that I’d written about several of this operator’s casinos.

That’s because Hyper Casino is owned by the same company behind Fun Casino. Once my memory sparked into gear, I remembered that I quite liked the design of the site and that it had a cute and fun aesthetic, but that’s about it.

I did remember more about YakoCasino, another L & L brand, but only because I reviewed it just a couple of days ago.

My point is that these casinos aren’t exactly memorable, but that’s not necessarily a bad thing.

I have reviewed hundreds of online casinos—not just the ones that you see on this site. I have seen the good, the bad, and the downright ugly, and when you have so many different names and themes being thrown at you, very little sticks.

In fact, the only sites that stick are the ones that are atrocious, the ones that are spectacular, and the ones that have bombarded me with adverts. As L & L doesn’t have the budget of the likes of Entain and Kindred, and its projects are neither perfect nor terrible, they tend to slip off my radar.

But don’t let that put you off. After all, you’re not here because you’re looking for the number 1 casino in the world. There’s already a good chance that you’ve found your favourite casino and nothing will change that. You’re just looking for another casino that is safe, secure, has a good variety of games, a big Welcome Bonus, and a no-nonsense interface.

L & L casinos often tick those boxes. They might not be finding their way at the top of our Bitcoin casino top list, but they will certainly stay in the upper half of our table.

Hyper Casino doesn’t have the widest selection of developers or games. If you’re looking for a casino like BetAndYou, where bigger is better and there are dozens of developers and thousands of games, then you’re going to be disappointed with Hyper Casino.

NetEnt and Microgaming are the main developers listed here, followed by Blueprint Gaming, the master of jackpot slots and one of my personal favourite creators. Big Time Gaming has also thrown its hat into the ring, adding its Megaways titles and other classics.

NextGen, SG Gaming, Novomatic, and High 5 Games are also listed here, as is Thunderkick. You won’t find games from Playtech, Betsoft, Yggdrasil, Pragmatic Play, Play N’ GO, and many other popular creators, but the developers that are there should be enough to keep you interested.

The Live Casino games on Hyper Casino are provided by Evolution Gaming, the biggest name in the Live Dealer sector and one that is responsible for a host of top Live Casino games. You can play Baccarat, Blackjack, Poker, Roulette, and Craps in a Live Casino format and there is also a variety of gameshow titles, including the massively popular Crazy Time and Deal or No Deal.

All Hyper Casino games are supported on mobile, as well as desktop, so you can play them on your phone and your tablet. iOS and Android devices are supported here and you don’t need to download the casino. You can access the site directly through your mobile browser.

There have been a few customer complaints about L & L websites, with some reviews suggesting that their sites have been missing key pages. It’s something that I commented on when reviewing one of the brand’s many sites, noting that I didn’t have the same issues myself and that they must have fixed it. However, I did notice some issues with Hyper Casino.

In fact, at the time of this review, the Promotions page is completely empty. Initially, I thought it was a regional thing but after I checked from multiple different regions using a VPN, I discovered that the issue was the same. 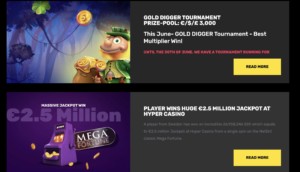 Hyper Casino doesn’t have a huge selection of payment methods. Neteller, Skrill, Visa, Trusty, Zimpler, and interac are all accepted here and you can also use Bitcoin in certain regions. There are fewer options for withdrawals, but the choice is not too bad on the whole.

There are a couple of issues elsewhere, though. Firstly, Hyper Casino has a withdrawal limit that is capped at £5,000 a day. It’s much bigger than you will find on other online casinos but the fact that it exists is definitely not a positive.

There is also a pending time of between 24 and 72 hours. On the lower end of the scale, it’s not too bad. But on the higher end, it’s far too long. Casinos shouldn’t be holding onto player funds for 3 days in this day and age, not when you have other sites processing payments within minutes.

The good news is that things should be quicker and easier the longer that you are a member. However, to get to that point, you have to make a lot of slow withdrawals and wait a long time for your money to appear.

I did manage to track down information about the Welcome Bonus in the end, though. It offers up to £300 for all new players and this is spread across your first two deposits, with the first capped at £100 for a 100% bonus and the second capped at £200 for a 50% bonus.

You need to deposit a minimum of £10 to qualify for this offer and it is only available to players across a handful of regions, including the United Kingdom, Canada, India, New Zealand, and Austria.

Once the bonus has landed in your account, you need to clear a wagering requirement of 45x before the credits turn into cash and you can withdraw them.

I have spoken a lot about the importance of good customer support. It is one of the most overlooked features on an online casino and yet it’s something I always include in my reviews.

I have been gambling since I was old enough to do so (and not a day younger, if anyone asks) and I am now approaching 40. I have joined hundreds of sites for the purpose of reviews and I have played at dozens more just for the hell of it (and the bonuses, of course). In that time, I have had several run-ins with terrible customer support, as noted in my review of Betfair.

There will come a time when the customer sport just doesn’t listen, either because they ignore you outright or because they keep sending form replies to your personalised emails. It happens, and it’s irritating. The only thing that can make it worse is when you follow up with complaints and bad reviews and the casino ignores them as well.

It’s why I have stressed the importance of responding to good reviews on casino reviews like Syndicate Online Casino, as well as dozens of others.

Many casinos have specific teams whose job it is to deal with these negative reviews. They have more power than the first-line customer support teams and are also more responsive and willing to help.

When you don’t have that, and the casino just doesn’t listen, you have a recipe for disaster and that’s what seems to have happened here.

A lot of the negative reviews about Hyper Casino concern its customer support. Some positives have also been highlighted, and I personally found them to be okay, but on the whole, there are far too many negative comments to overlook.

Players seem to suggest that verifications take far too long to finalise and that customer support teams either won’t respond or don’t care.

As noted above, this is not true for everyone. But even if 1 out of 100 players has that issue, it’s far too many, especially when they don’t respond to complaints and bad reviews.

It’s a shame, as it’s not an issue that’s common across all L & L casinos.

When Was Hyper Casino Founded?

Hyper Casino launched in 2019 but it is owned by a brand that has been around a lot longer than that. In fact, the one of the company’s sister sites, Yakocasino, launched back in 2015 and has been growing steadily ever since.

Hyper Casino is owned by L & L Europe Ltd, a brand that is also responsible for Fun Casino and Yakocasino, as noted above.

Is it Available in the United Kingdom?

You can play Hyper Casino in the UK as the site is fully licensed with the UK Gambling Commission. The UKGC is one of the strictest regulators in the online gambling sector and places a lot of demands on its licensees. This ensures that all of the casinos licensed in the UK follow strict protocols with regards to fairness, security, and safety, as well anti-money laundering and underage gambling.

Can I Use Bitcoin?

Yes, Hyper Casino accepts Bitcoin. There are not many payment options accepted here, though. You don’t have a great deal of variety, but some of the most popular payment methods are covered.

How Long is Verification?

It depends. If everything goes smoothly it should be completed within a couple of days. However, if there is an issue it may be prolonged by a few days. Some of the Hyper Casino user reviews also suggest that the process can drag out for many days and even a couple of weeks. I have been there with other sites so I know that it can happen and I also know that it is incredibly frustrating. However, it seems to be rare, and if you get it out of the way before you start playing and winning, you’ll avoid any serious frustrations.

How Long are Withdrawals?

The speed of withdrawals will depend on the method that you use. Generally, it takes anywhere from 1 to 4 days. If you want to move things along quickly, use web wallets and cryptocurrencies. 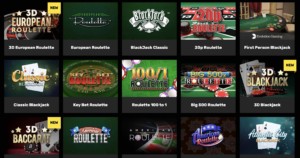 I recently reviewed YakoCasino, a site that I praised for its simple design, its solid copywriting, and its dedicated customer support. You can see that Hyper Casino has tried to follow a similar style but it ultimately falls flat in the customer support department.

YakoCasino takes the time to respond to player reviews and complaints. It had a dedicated Live Chat section that was available 24/7. Hyper Casino, on the other hand, doesn’t seem to show its players the same support and dedication and that’s a bit of a let-down.

There are other positives here, though, so don’t give up on this one just yet. It doesn’t have the widest selection of developers or games and the payment methods are also very limited, but if you just want a few casino bonuses, and the chance to play some of your favourite slots, you should add it to your list.