To meet the growing demand caused by limited sports/entertainment and the global lockdowns, new sites were launched, new games were created, and everyone redoubled their efforts. One such site was Wolfy Casino. It hit the market toward the end of the year and was backed by one of the biggest names in the online gambling sector.

Wolfy Casino is Bitcoin friendly and it also accepts a selection of other cryptocurrencies, as well as a number of traditional methods. In addition, players can take their pick from hundreds of casino games created by dozens of top-tier developers. It also has stacks of bonuses targeted toward new and loyal players—all the hallmarks of a top site.

In this Wolfy Casino review, we see how the site compares to some of our highest-rated BTC casinos and ask whether or not it’s worthy of your time and money. 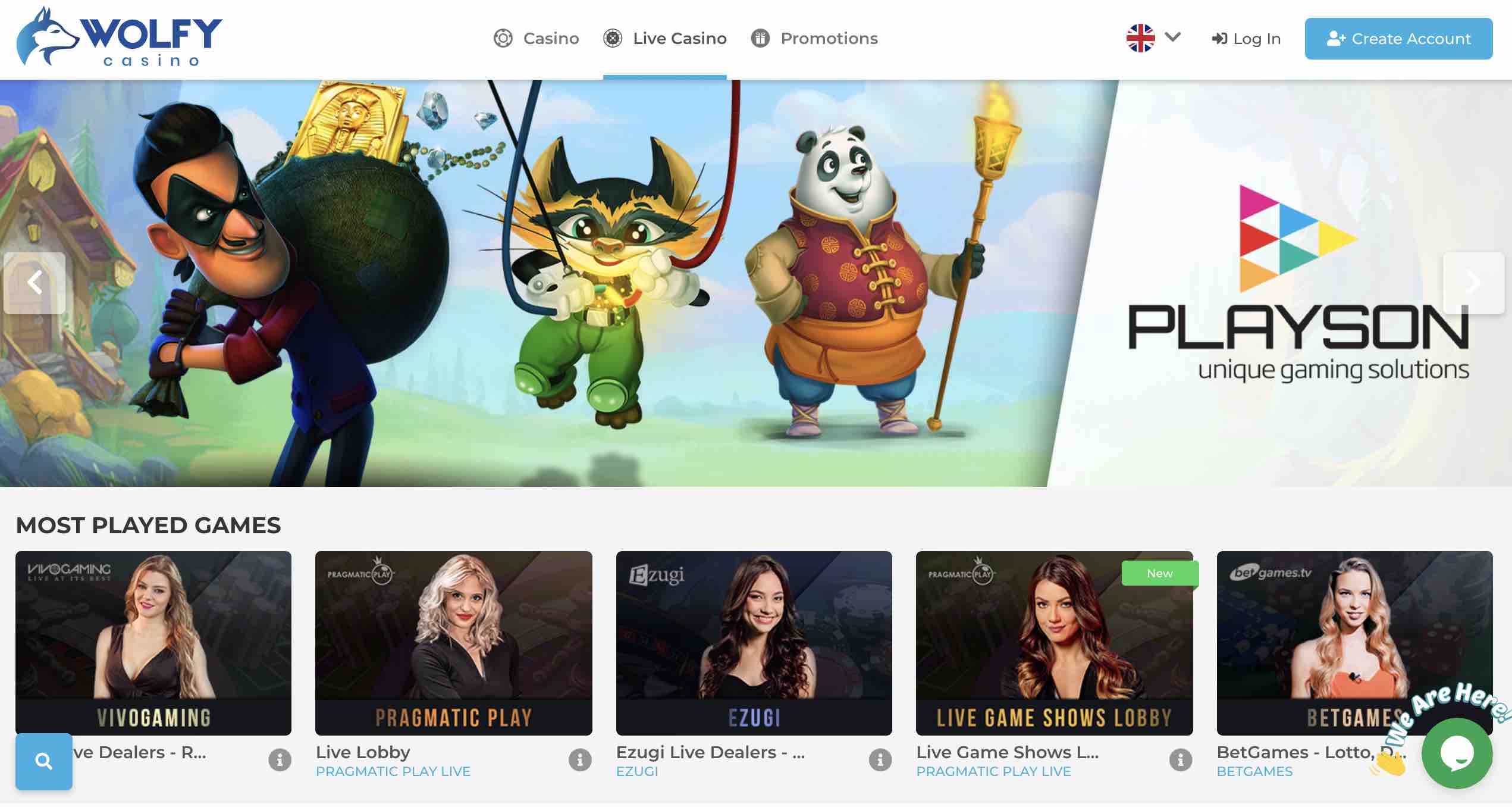 Wolfy Casino is owned by the Mirage Corporation. We have reviewed a few of the brand’s casinos in the past, and our pick of the bunch was the stylish Horus Casino, which utilises an Ancient Egyptian theme. It has a license from the authorities of Curacao and is available in English and German, with currency options including Euros, Bitcoins, Litecoins, and Canadian Dollars.

Like many Curacao-licensed casinos, Wolfy Casino seems to target its services toward players in Canada, Germany, Australia, Russia, and a handful of other major gambling regions. It doesn’t have the licenses required to operate in Sweden or the United Kingdom, and it’s also restricted in France, Spain, the United States, and a host of other countries.

The site features a wild/wolf theme and a cool blue and white colour scheme. If we had to pick fault, it wouldn’t be with the site itself, but with the writing. We’re not sure if it was auto translated or not, but it is in dire need of an editor. In the About Us section, for instance “which” is spelled “wich”, “Netherlands” has been given an extra “e” and for some inexplicable reason, “license” is written as “livens”.

There’s a lot of random capitalisation, and it’s a little repetitive and dull. It might seem like we’re nit-picking, and to an extent we are. But we’re only thinking about how we would approach the site as a player, and for us, clean and polished text is essential.

In the past, we have refused to buy from e-commerce sites that have even the simplest mistakes. We’re a little more accommodating with online casinos as we know how these texts are created (more often than not, they are translated from other languages or contracted to companies who outsource to cheap non-skilled writers) but it’s still something that needs to be addressed.

These minor issues aside, Wolfy Casino has a solid aesthetic and it is easy to navigate. Everything is neatly laid out and it works well on desktop and mobile. 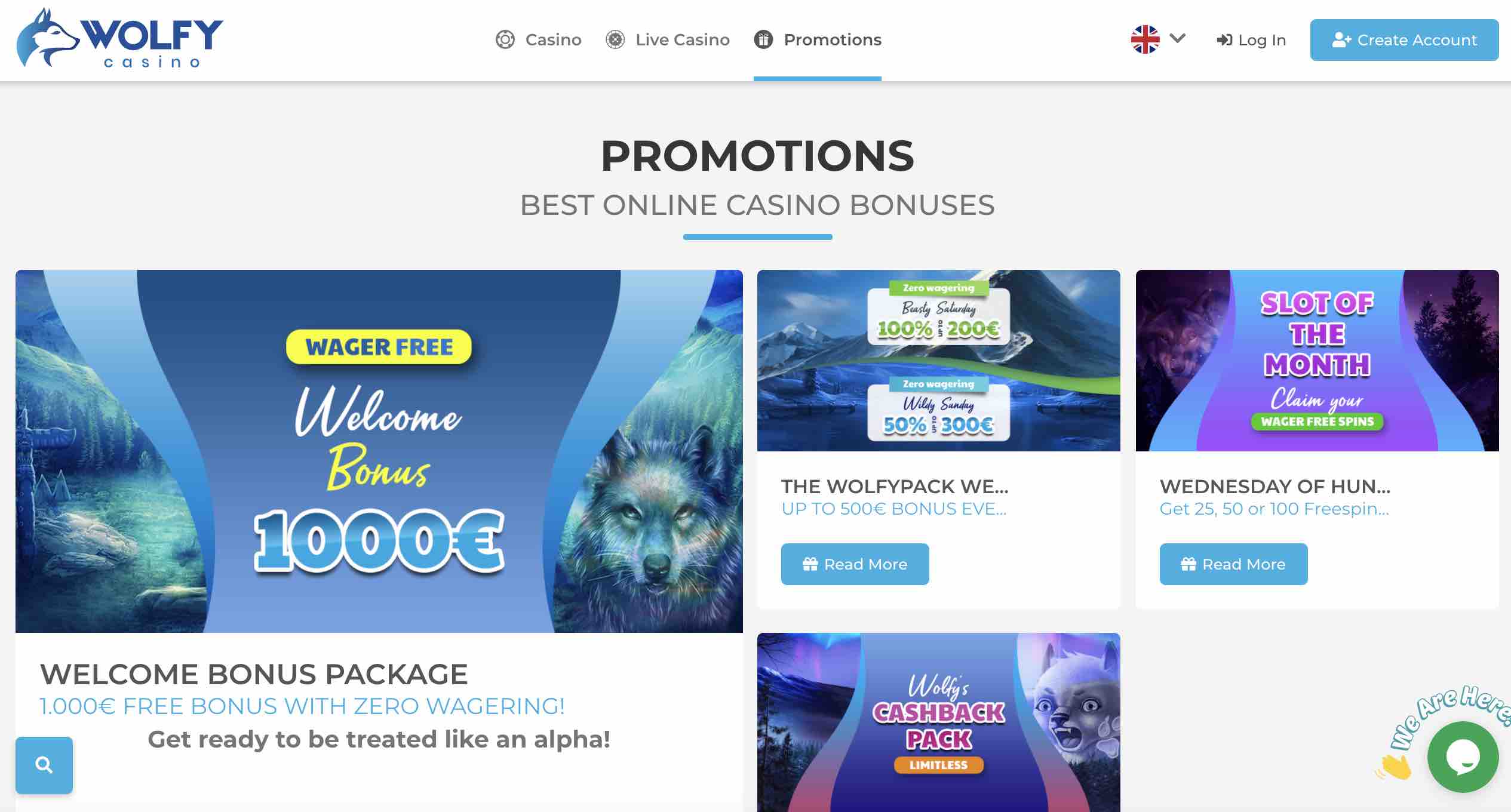 You’ll find dozens of big-name developers in the Wolfy Casino games room. Many of our personal favourites are here, including Betsoft, NetEnt, Yggdrasil, Quickspin, Blueprint Gaming, Thunderkick, Wazdan, and Microgaming. In fact, there are very few missing from that list.

These developers combine to provide an eclectic range of titles, spanning some of the biggest and best games, features, and mechanics in the business, such as:

We counted nearly 4,000 games in total, putting Wolfy Casino on par with top sites like MELbet. These games cover many different themes, are provided by a multitude of different creators, and have something to offer everyone. What’s more, additional titles are added to the list all of the time, ensuring its roster just keeps on growing and you always have something new to experience. 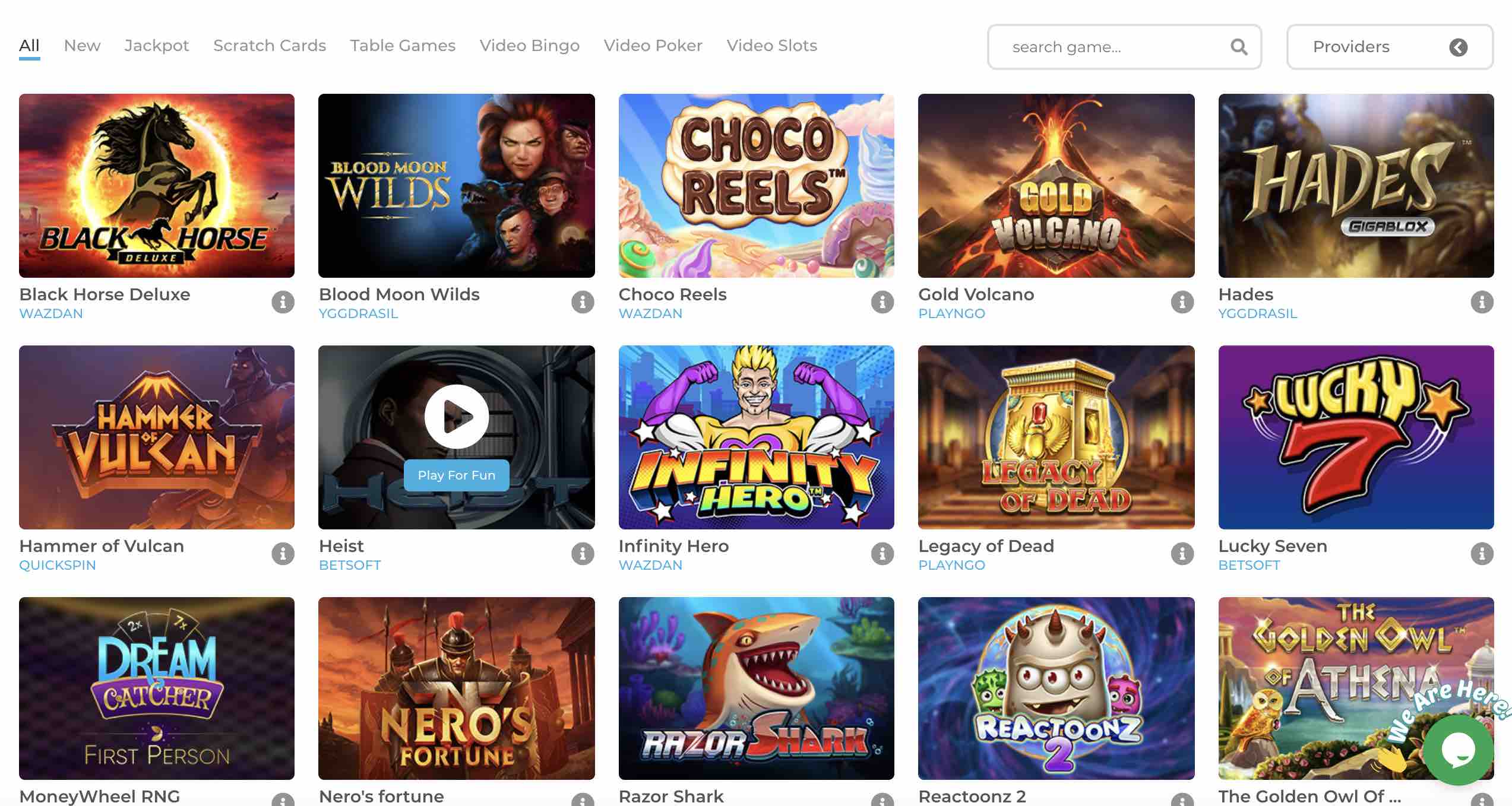 Wolfy Casino invites all new players to “join the pack” with an enticing Welcome Bonus, one that beckons you with a promise of up to €1.000 when you make your first four deposits. The bonus is structured as follows:

That’s a total of €1.000, and it’s offered to everyone who makes four qualifying deposits. It’s not as immense as some of the other bonuses we have covered, including the 1xBit Deposit Bonus, but it’s still a generous promotion and if you’re a small stake player, it’s perfect.

As we have noted many times before, if you’re only depositing up to €100 at a time, it doesn’t make a difference if a matched deposit bonus is capped at €100 or €1.000. Sure, players are attracted by those larger numbers, but they don’t always mean what you think they mean and it’s much more important to calculate what you have to gain personally, as opposed to the maximum amount offered by the bonus.

Other bonuses are available as well, including Reload offers, Free Spins, and more. Take a look at the Promotions page to learn more and to ensure you stay up to date with the latest promotions.

Wolfy Casino accepts a wide selection of deposit and withdrawal options, including Visa, ecoPayz, Neteller, Interac, Bitcoin, Litecoin, and countless others. You can use cryptocurrencies and fiat currencies, but make sure you pay attention to the limits and withdrawal speeds, as they may change from method to method.

In general, it takes just a couple of days to get your winnings when you initiate a withdrawal. The pending time varies from just a few hours to 2 days. If you’re using e-wallets and cryptocurrencies, you’ll get your money as soon as this short pending period is over. If you’re opting for credit cards, debit cards, and bank transfers, it may take a few more days.

One of the biggest issues we have with Wolfy Casino, and really the only noteworthy issue, is the withdrawal limit. It restricts players to withdrawals to no more than €5.000 a week. It’s by no means the worst we have seen and is much better than the measly withdrawal limit on Cadoola Casino and other Araxio sites. However, it’s still pretty limiting and makes life difficult for high rollers.

We should also mention the casino’s verification process, which is one of the quickest and easiest that we have encountered. As with all legitimate casinos, you will still be asked to submit documents and verify your identity, but this process is generally very quick, easy, and painless.

Alongside withdrawal limits, one of the biggest gripes we have with online casinos is that the verification process is usually painfully slow and incredibly frustrating. We can’t tell you how many times we have snapped and sent all the required photographs, only to get an email a few days later telling us that an uncropped image is cropped or that a high-res image is blurry.

It’s infuriating, and thankfully, it’s not something you need to worry about with Wolfy Casino. 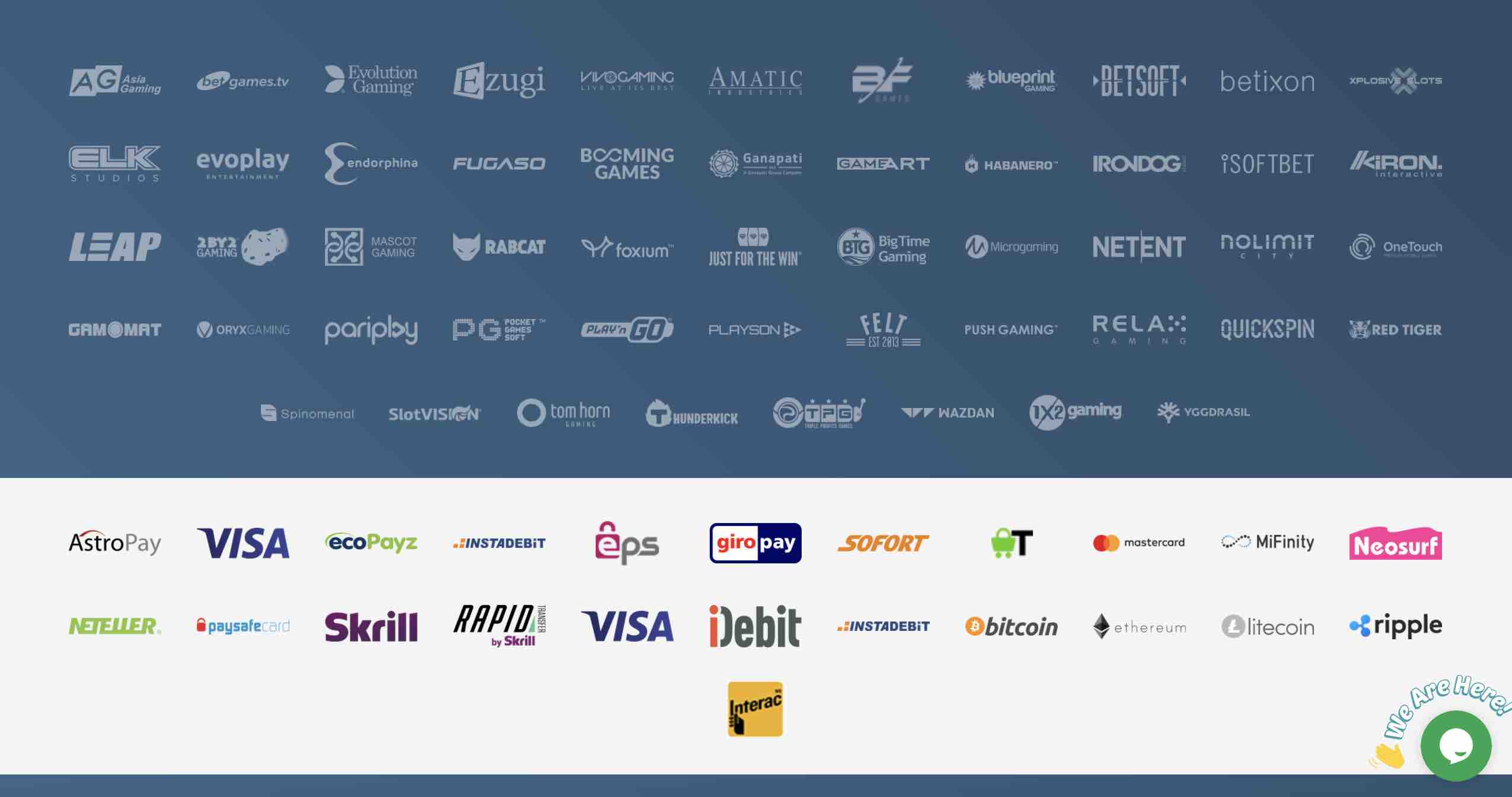 At the time of writing, Wolfy Casino is a brand-new casino. Usually, we spend some time researching a casino and making sure it’s worthy of our list, and whether or not it should even be passed to our writers. That way, we don’t waste time on terrible sites and we make sure only legitimate and useful sites make it onto our list.

We followed the same pattern with Wolfy Casino, but because that process began just days after launch, there were very few user comments by the time we compiled this review.

There were some, however, and many of them were positive, which is always a good sign. More importantly, these reviews had received replies from a dedicated Wolfy Casino support team.

We have spoken about review replies in the past, noting just how important it is for companies to do this. In our experience, fewer than a third of all online casinos respond to reviews and complaints placed on other sites. Maybe they think those comments are none of their business, maybe they don’t care; whatever the reason, they don’t respond and it doesn’t look good to prospective players.

Of the ones that do reply, some make the mistake of being rude or condescending to their customers. Others cite their Terms and Conditions, which is one of the most infuriating things that a company can do. They try to alleviate the player’s concerns and find a solution that works for them and looks good to players reading the review. In the end, they end up angering everyone and giving themselves a bad name.

Thankfully, Wolfy Casino doesn’t do any of this. Not only does it respond to user reviews, but it does so in a way that is succinct, helpful, and doesn’t anger the player.

What is the Withdrawal Limit

Wolfy Casino has a withdrawal limit of €5,000 a week. Take a look at our Payments Section above for more information.

What Happens if I Exceed the Withdrawal Limit?

If you withdraw more than the limit allows, the remaining cash will be rolled into the next withdrawal period. In other words, it will still be withdrawn and it will get to your eventually.

What are the Restricted Countries?

We have listed all restricted countries below this Wolfy Casino review. If your country of residence is on this list then you likely won't be able to join the casino.

Can I Use Bitcoin?

Bitcoin is one of the many payment methods accepted here so yes, you can use it for deposits and withdrawals.

Wolfy Casino can be viewed in both German and English.

What Other Sites Should I Look Into?

If you like Wolfy Casino and want something similar, something that also offers a big bonus, checkout the impressive Zig Zag Casino.

Although a number of casinos have made our list in 2020, not all have impressed us to the same degree. For every site that makes it to the top of our list like Bitstarz, there are over a dozen others that fall short. Thankfully, Wolfy Casino is firmly in the former category and is one of the better sites that we have come across.

It could be better, there is no doubt about that, but the only big issue we have with this site is the addition of a withdrawal limit. It’s bad news for players who deposit and withdraw large sums on a regular basis but it’s not something that will impact small stake players. If you’re in that category, Wolfy Casino could be the site for you.

Join today via the links on this page and you’ll be connected to the latest Welcome Bonus, guaranteeing a big reward and ensuring you get off to the best possible start. In a few short minutes, you could be spinning your way to a plethora of progressive jackpots and enjoying a number of great features.